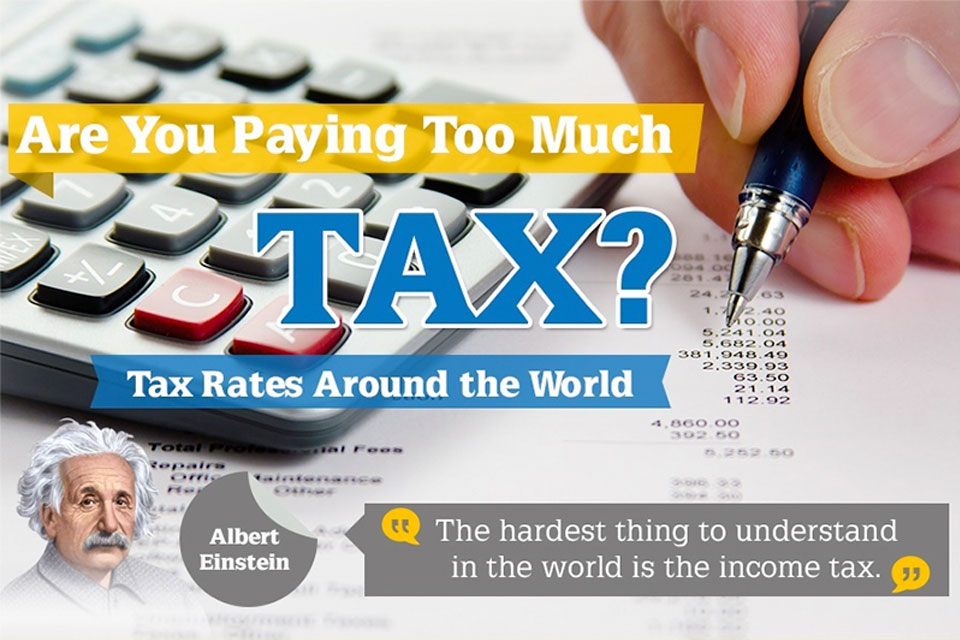 How much tax do you pay?

In America, it’s typical to pay about 50% if you include your income tax and all the sales tax you pay.

Of course, some people pay more, others pay less.  Those in poverty often pay little to no income tax, while many rich people evade taxes through legal loopholes in the system.  Therefore, the middle class is often left with the bill.

I’m not complaining, that’s just how it goes.

As a middle class American, you may be surprised to find out that you still pay less tax than much of the world.

See how you stack up in this infographic…

I want to take a moment to make a quick note about taxes and politics.  We all see the news and the headlines about Democrats supposedly trying to increase the tax on the rich, while Republicans are supposedly trying to avoid taxing the rich.  Politicians on the extreme left may even push for a socialist government that provides all kinds of things for free.

Now I’m not going to get into the Republican/Democrat argument, because I am neither of those (I’m Libertarian, shout out to all my Libertarian friends!), but also because time after time, regardless of what they preach, they end up doing the same things.

The point is, nothing is free.  When the government implements programs that cost money, someone has to pay for it.

This usually comes in the form of taxes.  The more free stuff the government provides, the more they raise taxes.

That’s just how it has to be.  And in this infographic, you’re going to see that the countries who provide the most free programs, have the highest tax rates.  It goes hand-in-hand.

That’s quite enough of my political rant (of lack thereof), so here’s the graphic you’ve been waiting for…

You may also like 12 of the Most Bizarre Tax Deductions Ever [Infographic].