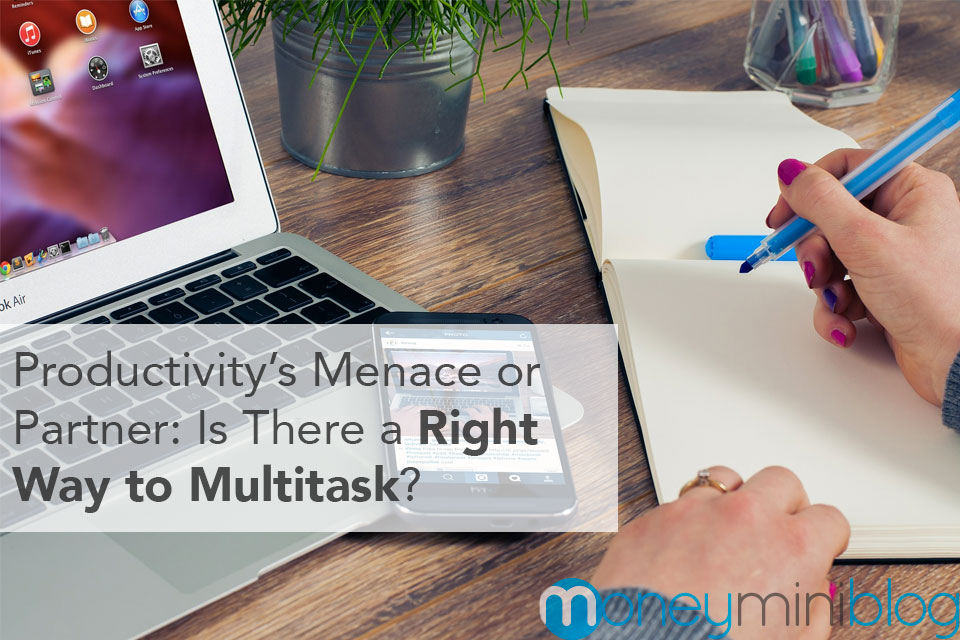 Multitasking was once viewed as a coveted skill. Like computers, humans were expected to be able to perform five tasks at once without slowing down. Phone calls, emails, filing, etc, etc. The more we do at once, the faster we can be at completing those tasks.

That dream of a perfect multi-tasker was short lived. Studies came out suggesting multitasking was the bane of productivity, and evidence proved that cognitive ability – also known as IQ – lowered significantly when employees overburdened themselves with too much work at once. Our electronic-heavy offices were also contributing to the lack of productivity among workers. As a 2009 study with Stanford University found out, workers that “are regularly bombarded with several streams of electronic information do not pay attention” and are less likely to recall that information soon after.

So began the demonization of multitasking; but it should not be discredited so thoroughly.

The true underlying danger to multitasking lies in our inability to split our attention between so many tasks. What was dubbed as “switching mindsets” in a 2010 study called Being of Two Minds, researchers found that if we divide our attention too much, we subtract from our ‘processing power.’ When workers performed tasks that required different hemispheres of their brain (right is generally creative expression, left is more logic) then they had to spend time between each task readjusting their mindset before they could proceed. The adjustment made the tasks take longer, even when the subjects thought they were being more productive.

Despite all the naysaying, there is a way to multitask and do it correctly. Every person’s brain and ability is different, so it might not work for everyone. But multitasking is not worth throwing out entirely.

The Secret to ‘Dual-Tasking’

Researchers delved into the potential benefits for multitasking and found some surprising results. Further building off the idea of “mindsets” from the 2010 Two Minds study, researchers with the French National Institute for Health and Medical Research in Paris (summarized in Scientific America) surmised that multitasking on only two projects that required the same mindset did lead to increased productivity.

This was deemed “dual-tasking” by the lead researcher, Etienne Koechlin. However, the secret to dual-tasking properly was a strong incentive to perform both tasks. In the study participants were rewarded with money, but in real life the reward could be as simple as completing the assignment. As Koechlin noted: “People should be able to switch back and forth between two complex tasks (by postponing one while executing the other one), provided that the incentive of pursuing each task is large enough.”

Another study through Ohio State University in 2012 found a positive example of multitasking among its students. The study focused on students that watched television or listened to music while completing homework. The results of the study found that students were more “emotionally satisfied” while doing homework because of the “media multitasking.” In this study, gratification trumped the damaging effects of multitasking and switching mindsets. Students that were happier performed better, even if it took them longer to complete the task. The author, Zheng Wang, stated: “They are not being more productive—they just feel more emotionally satisfied from their work… [Students] felt satisfied not because they were effective at studying, but because the addition of TV made the studying entertaining. The combination of the activities accounts for the good feelings obtained… they get an emotional reward that keeps them doing it.”

When it comes to working in the office, television might not be a reasonable option for most employees. Despite this, employers should focus on employee satisfaction, as it is shown to be vital to a business’ success. Unhappy workers can cost their employer billions of dollars annually in theft, sick days, and mediocre work. A Gallup Poll revealed in 2013 that only 13% of the world’s workforce feel engaged at their job. This disengaged epidemic is affecting businesses across all industries, and can be easily mitigated by focusing on company culture or employee satisfaction. Allowing multitasking in the office can help. Ensuring that employees are engaged and satisfied at work can result in years of dedication, retention, and exemplary service.

Of course, multitasking must still be performed in limiting amounts. As Patrick Allen pointed out in his LifeHacker article, the trick to multitasking effectively lies in time management. Know when you are most productive, and avoid multitasking when you can zero in on the project at hand. When it’s the end of the day and you feel a little distracted, keep your brain active by dual-tasking between similar projects. As is the case for most work-related productivity hacks: prioritization, creating systems, and time management are all vital to success.

It’s an equation for business growth and accomplishment. If workers are happy, engaged, and productive, then the business will be profitable. Multitasking isn’t the enemy of productivity in every case; it is simply a method to the madness of business. Do it correctly and it may work in your favor.

About the author:
Katie McBeth is a freelance writer out of Boise, ID, with experience in marketing for small businesses and management. When she’s not writing about millennials or small businesses, she spends her free time training her dog Toby to herd her three annoying (but adorable) cats around her house. You can follow her animal and writing adventures on Instagram or Twitter: @ktmcbeth.