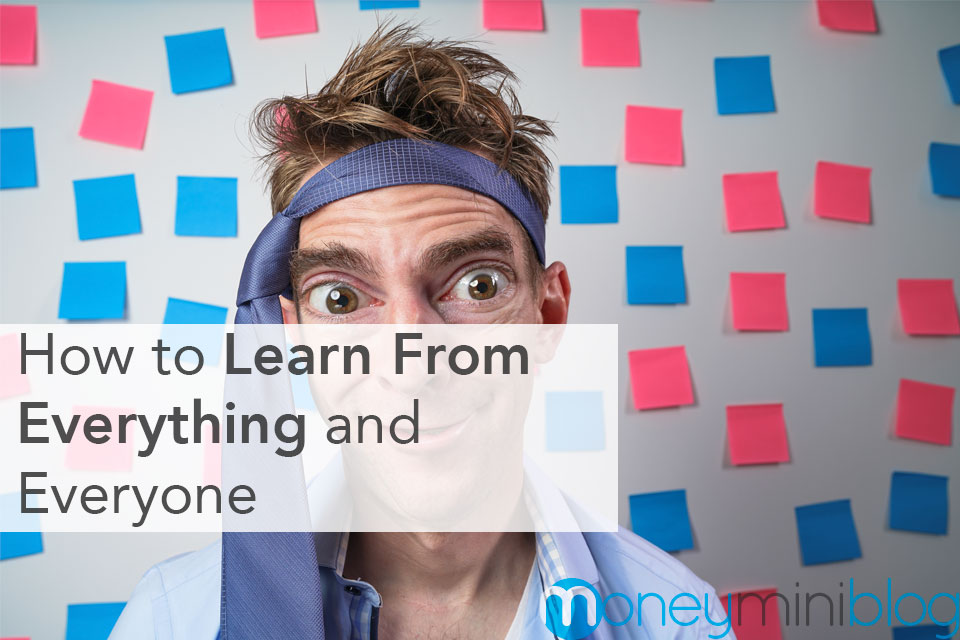 Have you ever heard the saying “you either win or you learn?”

Or the popular “you have to fail forward”?

I’m sure you understand the idea of using situations, good and bad, as learning experiences, but that’s easier said than done, right?

It’s easy to talk about learning in every situation, but when you’re upset, angry or disappointed, it doesn’t seem so easy.

It starts with your perspective.  Here’s how to learn from everything and everyone…

How to Learn From Success

Success if such a powerful teacher.  It teaches us what we did right, and what we should replicate.  Success makes us feel great – it’s motivation to keep going, to strive for more, and to have more success in the future, but success can also be a curse.

I’ve noticed that when people use the phrase “you’ve got to forget the past”, they’re always talking about the negative stuff.  People like to forget losses and remember wins, but there are reasons for doing the opposite, at least sometimes.

How many people have you known who achieved a certain level of success, to the point that they thought something was beneath them?  The real estate agent sells a million dollar mansion, and then three years later when the money runs out and the market dries up, he ends up homeless, because he refuses to get a job working for $10/hour to pay the bills.  After all, he was in the Million Dollar Club!  He can’t get a job until it pays what he’s “worth”, right?  It’s a trap.

Sometimes, we need to forget our successes.  It’s also called swallowing our pride.

Take all of the lessons you can from your success, but remember them as lessons, don’t hold them with hard-headed pride.

How to Learn From Failure

This is the big one.  How many books are written about learning from failure?  This is also the hard one.

So what’s the trick?  It’s not as much of a trick as it is a perspective.  Learning from failure starts before the failure happens.  You have to position your mind to think right so that when failure arises, you’re prepared for it, and ready to learn.

I have made a habit of using a motivation paper in the mornings.  This paper has a few quotes, some Scripture references, but predominantly, it has reminders on it.  Here’s the most powerful reminder on my paper:

“Learn from every situation today, good or bad.  No matter how I feel about it, take a lesson from it”

Too easy.  It’s so simple, and we all know that this is the best mindset, but it’s the fact that I remind myself of this everyday that is so important.

You must remind yourself to learn from failure.  Before it happens.  Everyday.

If you do, I know it sounds cliché, but you never really fail.  It either works out, or you learn a valuable lesson.  Looking back in my life, there are plenty of times that I failed and I am better off because of it.  If I would have succeeded at what I was trying to do, I wouldn’t be the person I am today.

How to Learn From Other People

Yes, you really can learn from everyone.  Simply put, you either learn what to do or what not to do.  What works, and what doesn’t.

Become a people watcher – not in a creepy way.

Watch people.  Analyze what they do and why.  Find people who are where you want to be in life, and get on their schedule.  I’m a huge fan of mentorship lunches, dinners and coffee appointments.

When I say highly influential, I’m talking John Maxwell level.  When you set up mentorship sessions with leaders in your community, you’ll probably want to make the talk-time a little more equal.  John Maxwell actually explains mentorship very well.  He says many people think mentorship is one person who is way above the other person, and trying to eventually bring them up to their level.  That’s not true mentorship.  He explains that it’s actually two people who are taking turns pulling each other up to their level.  We all have something to learn, and we all have something to teach.

That being said, if you’re actually at a mentorship session with John Maxwell, just listen.

Don’t Miss the Lessons in Life

Perspective and mindset.  That’s what it comes down to.

If you want to feel sorry for yourself, you’ll miss the lesson.

If you think life owes you something, you’ll miss the lesson.

If you want to blame someone else for your failures, you’ll miss the lesson.