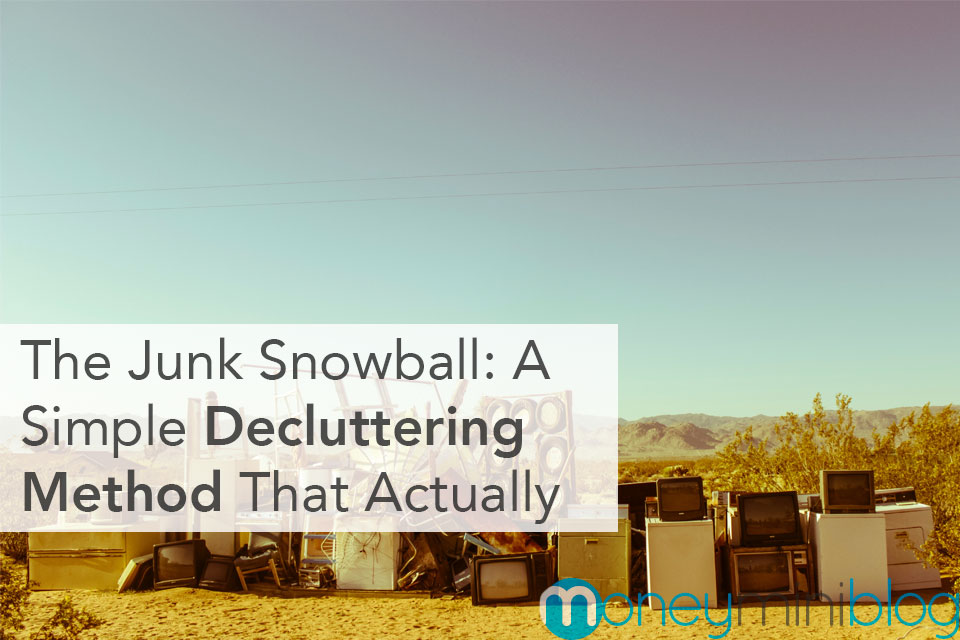 You have stuff you don’t use or need, and even stuff you forget you have.

Most of us have so much stuff that going through our garage is like shopping at a thrift store. All of the “oh yeah, I forgot about that!” and the “when did we buy this?”…you may even find that you’ve bought stuff that you didn’t even realize you already had.

The point is, you need to get rid of some stuff. Sell, donate, trash, or whatever…you need to declutter.

A junk snowball is like the debt snowball. It emphasizes small wins in the beginning to keep you motivated.

All you have to do is set a number of things to get rid of and get to it. Here’s a few pointers:

The Memories Aren’t in the Item Itself

Part of the clutter-struggle is about emotional attachment. That’s how hoarding usually starts.

Stuff has absolutely no emotional value. Don’t tie your memories to your stuff – you’ll always be disappointed.

How many people have their late grandmother’s old lamp sitting in storage collecting dust? The memories you have of your grandma are what’s important. Don’t tie your memories to an old lamp. What happens when it gets broken accidentally or destroyed in a disaster? You could be devastated, but you shouldn’t be.

You see, stuff like that ends up getting in the way of what’s really important. When you attach so much emotional value to an inanimate object, you’re placing value (that isn’t there) in a thing. If your child were to accidentally break it, you may lash out at them…over a thing, an object. What’s more important, your child or a lamp? The lamp is just an example, but I hope you see where I’m going, and if you place a lot of value in things, I hope you’ll reconsider.

Decluttering is About Freedom

How much stuff do you really need?

When you declutter and reduce the amount of things you own, a few things will start to happen:

Decluttering can even help you break bad habits. Want to stop watching so much TV? Sell all your DVDs. Heck, sell your TV!  Fine, I’ll back off a little. That may strike a nerve. But, correct me if I’m wrong, not having a TV will drastically reduce the amount of time you spend watching it, won’t it?

You can call it decluttering, minimalism or whatever, but really it’s about getting free. Getting free from consumerism, getting your time back, and taking control of your life.  While you’re at it, you might as well take control of your finances too.

How much stuff do you need to get rid of?  Do you attach emotional value to things?