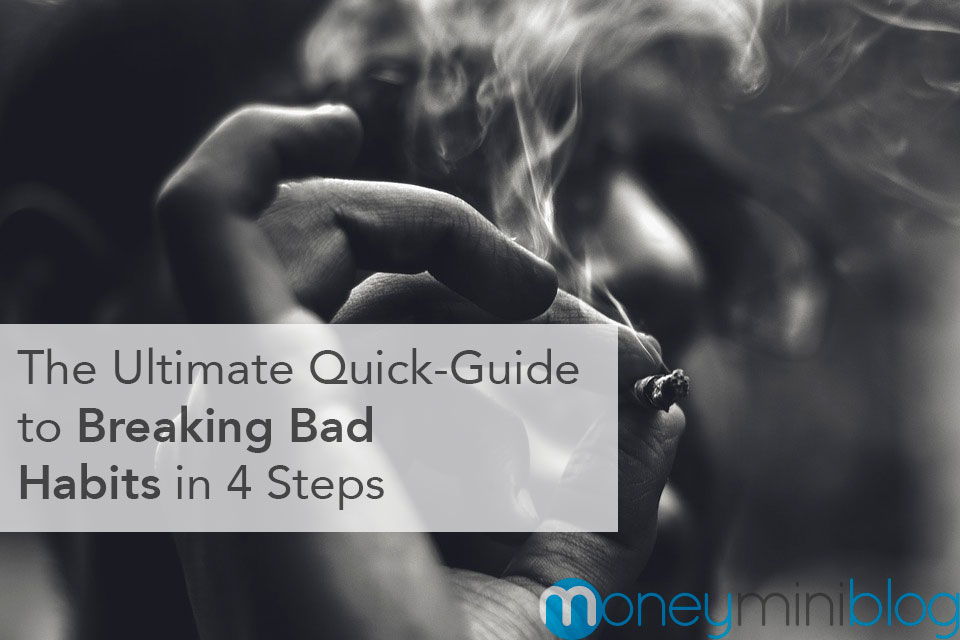 A habit isn’t bad or good on its own.

Positive habits are an absolute must for success in your health, finances…basically everything.

But negative habits, or bad habits, can combat your positive habits.

In fact, eliminating negative habits can be much more effective than starting new positive habits and often, it’s easier to break a bad habit than it is to stick with a new good habit.

The truth is, you need good habits in your life, but let’s break the bad ones first…

What is a Bad Habit?

This is a pretty basic question, but it’s worth asking. How do you define a bad habit?

When we first think of bad habits, the obvious things like smoking, overeating and alcoholism come to mind. I would simply put it like this: a bad habit is anything that takes away from achieving your goals without providing anything in return.

Most things are defined in your goals already. Let me explain…

Be honest with yourself. That’s the most important thing here.

So once you’ve defined the habit, how do you break it?

Don’t Just Break It, Replace It

It’s easier to replace a habit than it is to stop a habit completely out of the blue.

Want to stop watching so much TV? Replace your tube time with reading.

Create the new habits of walking and reading as you stop the old habits of smoking and watching too much TV.

The important thing to remember before starting this process is that you must have the motivation or it won’t happen.

You need to really find some motivation to quit. Think of all the reasons you should break the habit and try to use them as motivation. If one reason doesn’t do it for you, use another.

Let’s go back to smoking, since it makes an easy example…

You may want to quit smoking because the second hand smoke harms your family, whether directly or on your clothes.

Don’t have a family? Think about the fact that you likely spend over $2,000/year on cigarettes if you smoke a pack a day.

Money not an issue? Think about the fact that you may spend over 1,000 hours each year smoking. What else could you do with that time?

If you’re a smoker, you’ve heard about lung cancer so much that you’re likely numb to that reason.  So find a different one.

Keep going down the list until you find motivation that works for you.

Remember, anything is better than nothing in a situation like this.  For example, you could try an alternative to smoking, such as vaping (learn more about the vaping trend here).  The addiction is still there, but it’s a step in the right direction, and you’re avoiding many of the negative effects of smoking, such as secondhand smoke and smelling like a smoker.

Your Environment Determines Your Success

Vietnam was a tough place for a lot of reasons in the 1970s, but one of the little-known issues with American soldiers was heroin addictions. Upon the return of our troops, it was discovered that 2/5 of the returning soldiers had tried heroin in Vietnam and 1/5 of them were addicted to it. Addictions are quite common in Iraq war veterans as well. Given the atrocious events faced by these soldiers, they often turn to drugs as an escape from the haunting memories of war.

Most of the heroin addicts that typically come into clinics are coming from a “drug lifestyle”. Once they break their addiction at the clinic, they head back to their old house, with their old friends and they get right into their old habits.

If you want to break a bad habit, you have to change your environment.
Click To Tweet

Break a Bad Habit in 4 Steps

That’s it. It’s all about self-discipline from here, but these steps will make it as easy as possible. Once you’ve laid out your plan for breaking the habit with the above steps, it really doesn’t stand a chance.  You’ve got this.

Have you quit a bad habit before? What roadblocks did you run into? Share in the comments!