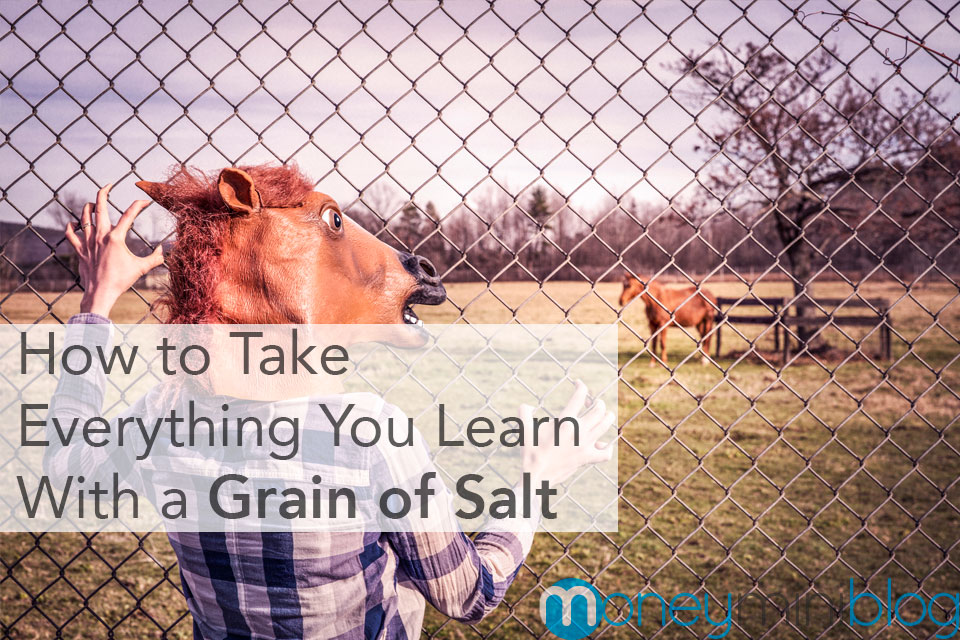 In the advertising and media world, everything can seem pretty black and white.

You see headlines like, “You Will Die Tomorrow if You Don’t Start Practicing This One Health Tip.” That seems pretty straight forward, but in reality, the title would have been more accurate as “This Health Tip Could Make You Feel Better.”

Everyone has the right answer, don’t they?

Everyone can tell you the best diet and why other diets don’t work. The same goes for exercise and finances.

It’s in our nature to think we’re right. Plus, article titles like the one above get a lot of clicks. I get it. They’re trying to grab you emotionally so you’ll read their article.

But here’s the truth about the information out there…

The Truth About “Experts”

What is an expert? Here’s the book definition:

Expert – a person who has special skill or knowledge in some particular field; specialist; authority:

That’s pretty vague, but you get the idea. It’s someone who knows more than most people about their subject. And while that is true, we’ve evolved experts to be a little… inflated.

Here’s a better definition of what an expert is in the teaching world, that includes authors, coaches, professional speakers… you get the idea:

Expert – A person who has spent a lot of time studying a certain topic. Often passionate, but not always correct.

If someone has much more experience than you, you should listen to them, but take it with a grain of salt. Question everything. The ability to question things is one of our greatest gifts.

I’m not saying to be skeptical of everything and everyone, but just because an “expert” says something, that doesn’t mean it’s true. Think about things like,

And apply this to me as well. I’ve read a small library of books on finances and productivity, but believe it or not, I’m still wrong sometimes. I know, I know, you thought I was perfect. 😉

These are all vital questions you should ask, but rather than taking time to ask these questions about everyone and everything, try to simply remain open-minded about the things you learn.

You’ll often hear me say things definitively. That’s how I write. I don’t like fluff, and I feel like it wastes time to constantly say things such as, “this might be like this possibly” or “I would guess that this is probably how it is.” I would rather say “this is how it is,” and if I’m wrong, I’m wrong. But at least I didn’t waste your time with wishy-washy words. I’m not afraid to admit that I’m wrong, you shouldn’t be either, and these experts should learn to do the same.

I actually used to be insecure about the things I wrote, but now I just write it, publish it, and deal with any questions or complaints in the comments. That’s why I still have the comments section. Use it!

The Truth About the Media and the Press

It’s easy to read a book, have a good idea, or learn something new, and start to believe you’re an expert.

The truth is, many of the articles you read on the internet are mere opinion. There are some facts scattered throughout, but the bulk is opinion.

Take personal finance for example. Is it a fact that consumer debt is bad? Nope, it’s simply an opinion – an opinion that most of the financial teachers and I hold, but an opinion still. Could someone promote the idea of living on credit cards, never paying off your full balance and simply opening a new card as they were maxed out? Sure, and I’m sure they could come up with some great reasons to do so.

Sadly, so much of writing and blogging has become more about how people can get views, rather than how good the content is. And while it’s true that if you don’t get views, it doesn’t matter how good your content is, it’s also true that you need worthwhile content for people to read once you click the catchy title.

Many experts go against the grain to become popular. They may not be fully sold on their idea, but being different often means being popular. Take Ramit Sethi, author of I Will Teach You to Be Rich, who goes against the grain by not caring about the little savings or about budgeting. He talks about focusing on the big savings and not worrying as much about small wins, such as saving $5 a day on Starbucks. I like Ramit, and I think he’s a great teacher, but he went against the grain with these ideas. And while I feel like he is legitimate in intention, you have to think that at least part of that was for the sake of popularity.

It’s not as easy to become famous if you’re teaching what the majority is teaching.

The world wants something different and new.

How to Learn “With a Grain of Salt”

Teachers and authors don’t always mean to come off as “gurus,” but part of being a successful teacher is having the appropriate amount of confidence, and sometimes that comes out looking suspiciously like know-it-all-ism.

Never stop learning. But take what you learn with a grain of salt. And make your own decisions.