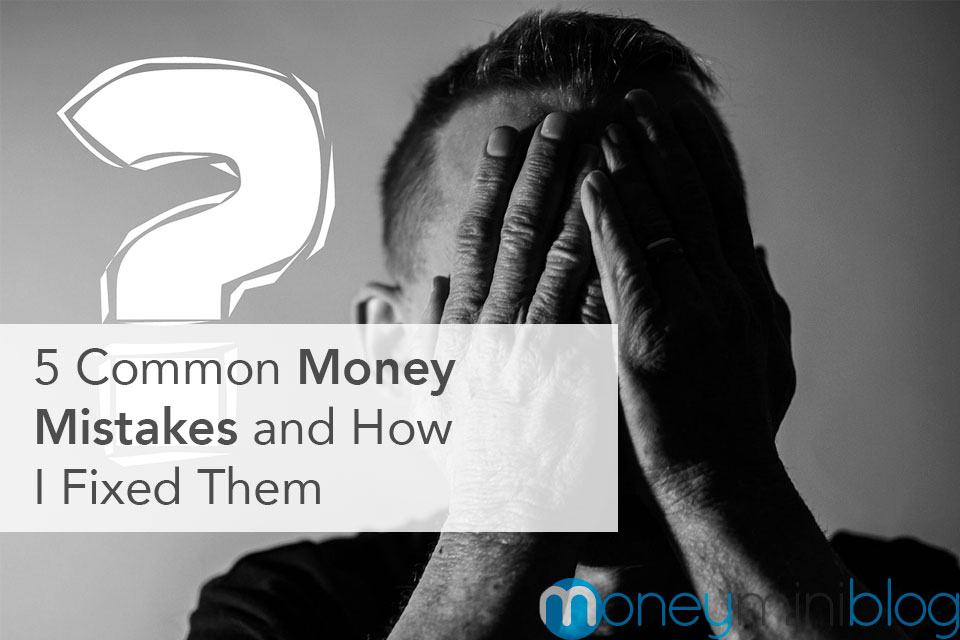 The thing about personal finance is that it takes a little while to learn the important concepts you need to know for managing your money.  The thing is, mistakes can happen very fast and if you try to ignore them, it just makes your mistakes worse and ultimately takes longer to fix them.

This article highlights a few of my own money mistakes and how I eventually learned how to fix them.

1. Graduating During a Recession

During college, I somehow managed to get along pretty well with my two credit cards.  I never spent too much and I always repaid my bills in full each month.  It wasn’t until right after I graduated college that I ran into a little bit of trouble.

I managed to graduate college right after the dot com bubble burst and the economy went into a recession.  The job market changed pretty drastically.  Signing bonuses disappeared and job offers were much harder to come by.

We can’t control the economy and it certainly isn’t your fault if you aren’t lucky enough to graduate during a good job market.  However, we are responsible for managing our expenses differently if the conditions around us change.  This was where I made my first mistake.

I was one of the lucky few that was able to find a job.  However, the only job I could find was not the job I hoped for and also was not a very high paying job.  Instead of a front office finance job, this was a back office customer service job at a large financial services company.

Unfortunately, this first job made it very difficult to save any extra money beyond my normal monthly expenses.  This first job also set the stage for my additional money mistakes that I made.

How I fixed My Job Situation

In the corporate world, there really aren’t many shortcuts.  You have to work hard to get ahead.  But you can work smarter to speed up the process.

My solution for improving my job prospects was to become a CFA charterholder.  Earning a professional designation required significantly less money than a full time MBA program and I believed the CFA charter offered just as much upside as an MBA from a top ranked school.

In order to achieve this goal, I needed to invest in a CFA prep course and spend at least 300 hours of time studying for each level of the exam.  The CFA exam has three exam levels so this was around 900 hours of studying over three years.

In the end this decision worked out really well me.  When I passed the first exam level, my job prospects immediately started to improve and I eventually moved into corporate banking.  Earning the CFA charter was not a quick fix in the short term, but it was a major improvement in the long run.

2. Not Following a Budget

During college and even right after college, I didn’t use a budget.  I paid rent with a monthly check and I used cash to pay for expenses on the weekends, but everything other expense was paid with a credit card.

In the first few months this sort of worked.  Occasionally I had enough monthly income to pay off the credit card statement in full.  In the other months, I used my rapidly declining savings account to pay off the difference.

The problem was that I pretty quickly depleted my savings account.  Instead of paying off my monthly balance in full, I paid off as much of the credit card balance as I could and the remaining balance was rolled over to the next month.  As I talk about later in the article, this led to more mistakes.

Thankfully, this was an easier problem to solve.  I initially started by listing all my expenses on a spreadsheet.  Monthly income was at the top and monthly expenses were below income.  Anything left over was used for paying down credit card debt or for savings.

This was a very good, free way to make a budget.  It provided me with clear limits on my discretionary expenses which previously had no defined limits.

The budgeting process also sent two clear signals about my finances: my monthly income did not meet my expenses and I needed to figure out how to cut my expenses.

At the time, I rationalized that I would be able to pay off my credit card balance in full, but not until next month.  All I needed to do was spend less this month and everything would be fine.

The problem was there were always different expenses that popped up.  It was hard to turn down eating out with friends or going to that concert.  I needed to make a small repair to my car.  The list seemed endless.

Before I knew it, my credit card balance was increasing each month along with the associated interest charges.  Within six months, my balance was approaching the $7,000 credit limit.

The only way to address my credit problem was to cut expenses or increase income.  Since I couldn’t immediately increase my salary, it was time for me to pick up a part time job.

I kept my day job, but I also picked up a few extra shifts working as a waiter and a bartender in the evenings and on weekends.  When I graduated from college, Uber didn’t exist and you couldn’t make extra money on your smartphone since phone apps didn’t exist.

Thankfully, I only needed to keep a part time job for 8 months.  One of the surprising benefits of working part time was that it cut down some of my discretionary spending.  So I ended up earning extra income as well as cutting some of my expenses.

My credit card balance was expanding partially because I didn’t rapidly reduce my expenses as fast as I should have.  Had I followed a budget, my budget would have also made it clear that my expenses too high and needed to be reduced.

When you combine overspending with an increasing monthly credit card balance, it creates a lethal combination for your finances.

I already mentioned my decision to take a part time job waiting tables and bartending.  However, I also took a few other steps that helped me generate extra money to pay down my credit card debt.

Since I just graduated college, I still had most of my textbooks and various stereo equipment and other tech from my college dorm.  At the time, Ebay was a high flying tech stock (even after the market crash) and was also a very popular web site.

I gathered everything I could find in my room that I didn’t need and listed it on eBay.  It turned out to be a great way to make an extra $300 dollars, but it was far from a sustainable income source.

The only realistic option for me was to find sustainable ways to reduce my expenses.  This is when I taught myself how to cook and started taking my lunch to work.

By getting in the habit of shopping at the grocery store on Sundays, it was very easy to buy breakfast and lunch for the upcoming week.  It was unrealistic for me to make dinner every night, but if I cooked twice a week, I could get a second dinner from the leftovers.  So that reduced paying for takeout to just 3 out of 7 nights a week.

These changes reduced my dinning budget by nearly 50% and made a major difference in my monthly budget.

Personal finance is a topic that should be included in every high school around the country.  Many high school students have a part time job in the summer or during the school year.

What most people don’t realize is they can contribute some of their summer income to a Roth IRA.  By contributing to a Roth IRA during high school rather than waiting until you graduate college and start working, can be the difference between being a multi-millionaire or just a millionaire.

Unfortunately, I also didn’t start contributing to a Roth IRA until I graduated college.  I also wasn’t in the financial position to contribute the full amount to my Roth until 3 years after I graduated when my finances were stabilized.

This meant that I started contributing to a Roth IRA when I turned 25.  Using an overly simplistic assumption of working until 65, making $400 monthly contributions, and earning 7%, my Roth IRA would be worth $1.07 million when I turned 65.

If I kept all the assumptions the same, but started contributing when I turned 15, the value of my Roth would more than double to $2.2 million at age 65.  Granted, those are very imprecise assumptions, but they show the power of compounding interest and the benefits of investing small amounts at an earlier age.

Not an Easy Fix

The only way for me to correct this final mistake, was to make use of a Roth IRA after I finished fixing my other financial issues.  But if I had known about Roth IRA’s when I was younger, I like to think that I would have started investing in low cost index fund when I was 16 rather than 25.

About the Author:
Lou created Financial Analyst Insider to help young professionals grow their careers and save extra money.