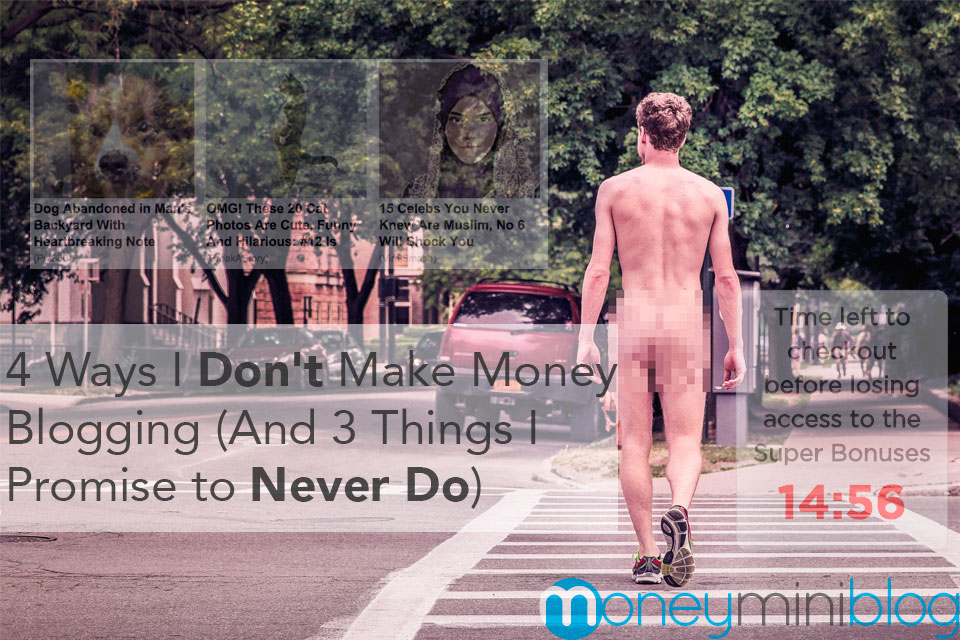 There are probably thousands of ways to make money blogging. And I don’t use most of them.

I know everyone says this, but I blog because I genuinely want to help people. I love to learn, write and teach, so this is a fitting place for me to be. However, because of that, I don’t make anywhere close to as much money as I could with this blog. And I’m fine with that.

In fact, I’m going to show you several ways I’ve cut my income for the sake of my readers.

Let me explain the ways I choose not to make money blogging, and why. I’ll also tell you 3 things I promise to never do as long as I own this blog.

How I Don’t Make Money Blogging

I’ll make this easy. By choice, I really only make money from affiliate deals with products I love and use, and from freelance writing. That’s it. I’m going to go over all the ways I used to make money, but right now, until my book is finished, I’m only making money from two sources: affiliates and writing.

I always seem to shoot myself in the foot. Once one source of income takes off, I decide that it’s not valuable for the entirety of the blog, so I end up removing it. I made money with ads, then I removed them. I started to make a lot of money with sponsored posts, and even bought a new iMac out of the deal, but then I stopped accepting them. The fact is, if it doesn’t benefit you, the reader, I’m not going to do it. My first priority has always been my readers. I’m serious about that. Now here’s the list:

3 Things I Promise to Never Do

Now that you know how I don’t make money with this blog, here are three things I promise to never do, whether they would potentially earn me money or not:

For example, when I write a review post, I’m not going to be overly positive about a product just because they pay me or send me free stuff. I’m going to be honest and tell you everything I think about it. I hope you can trust me on that!

What do you think about these ways to make money? Share all your thoughts below!