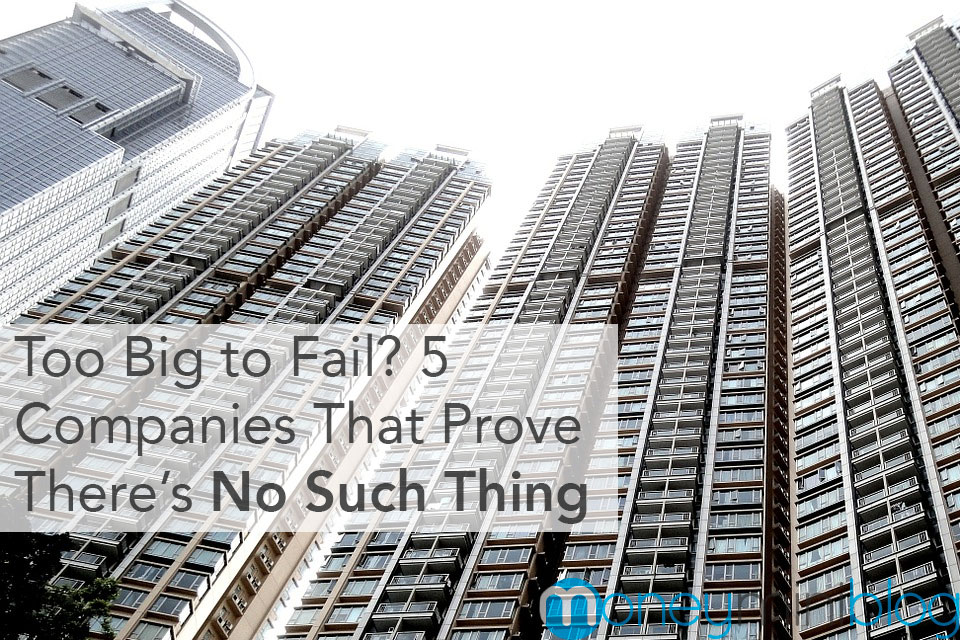 Related Book: Too Big to Fail

It’s easy to see, after the Great Recession of 2007-2009, that no company is too big to fail.  Here are some prime examples…

For decades, General Motors, Chrysler and Ford were known as “the big three”.  They were the top three leading competitors among American car companies.

In 2009, General Motors and Chrysler both filed for Chapter 11 bankruptcy and only survived due to a the government bailout.  Ford managed to stay afloat on their own.

These are two companies that everyone thought would outlive them, yet here they were filing for bankruptcy.  It happens.  In fact, the auto industry in general seemed too big to fail initially.  Here’s what Warren Buffett had to say, in 1999, about the auto industry and the big three (and about the dangers of investing in innovation too soon):

“I thought it would be instructive to go back and look at a couple of industries that transformed this country much earlier in this century: automobiles and aviation. Take automobiles first: I have here one page, out of 70 in total, of car and truck manufacturers that have operated in this country. At one time, there was a Berkshire car and an Omaha car. Naturally I noticed those. But there was also a telephone book of others.

All told, there appear to have been at least 2,000 car makes, in an industry that had an incredible impact on people’s lives. If you had foreseen in the early days of cars how this industry would develop, you would have said, “Here is the road to riches.” So what did we progress to by the 1990s? After corporate carnage that never let up, we came down to three U.S. car companies–themselves no lollapaloozas for investors. So here is an industry that had an enormous impact on America–and also an enormous impact, though not the anticipated one, on investors.”

General Motors and Chrysler are two examples that prove there’s no such thing as “too big to fail”.

I’m sure you’ve heard of this Houston-based energy company.  Enron has turned into an ongoing joke among investors, and even in Hollywood, with movies like Fun With Dick and Jane. Investors love to make jokes about it, though the actual story was pretty alarming.  If you owned any part of Enron, you didn’t think it was funny.

Enron was seemingly one of the best companies to work for with great pay, benefits and a bright future.

All it took was some accounting magic, or fraud rather, to take this company down.  As it turned out, their numbers weren’t quite as impressive as they were leading investors to believe.

This game of false numbers and fake reports took down Arthur Andersen, one of most successful accounting firms in the country, with Enron, as they both crumbled.

Eastman Kodak has been around since the late 1800s.  They held a spot of the Dow Jones Industrial Average (a.k.a. The Dow) for many years and at one time, they were one of the largest companies in America.

They stuck with competition and even invented some of the main technology that formed the digital camera.

Kodak went through a steady decline over the years, initially being removed from The Dow and, in 2010, the company was removed from Standard and Poor’s 500 Index (a.k.a. The S&P 500).

In 2012, they received a warning from the New York Stock Exchange (NYSE) that their stock price fell below $1.00 for 30 consecutive days (quite a fall from the $90 range in the 90s) and that it must increase for the company to stay on the NYSE.

Later than year, after filing for Chapter 11 bankruptcy protection, Kodak was removed from the NYSE and moved to the Over-the-Counter (OTC) exchange.

Today, Kodak is attempting to make a comeback.  They’ve certainly raised their stock price and made their way back to the NYSE, but they are nowhere close to the company they once were.

Another company that went bankrupt during The Great Recession.  They were valued at almost $700 billion.

This was when the crisis really took a turn for the worst.  Unlike some of the other major investment firms, the government didn’t bail out Lehman Brothers.

They fell hard and it was a shock to just about everybody.

Too Big to Fail?

To be clear, the economic term “too big to fail” really refers to a company that is so large its failure would cause a financial collapse – often to the point of being a monopoloy, or perhaps somehow past that point.

In a capitalist society like America, we try to avoid companies becoming a monopoly (though we do have a few, arguably) to prevent these types of problems from happening.

Companies like Walmart and the major auto companies may come close to this category, which explains why the government would have bailed out GM and Chrysler in 2009.

The main takeaway is that a company is never too big to fail.  In investing, remember that we never know what’s going to happen.  We have an idea, but we never really know.  There’s no such thing as a sure thing, but there is a such thing as doing your research and making the most informed investment decisions you can…and having contingency plans.

Do you think a company can be too big to fail?