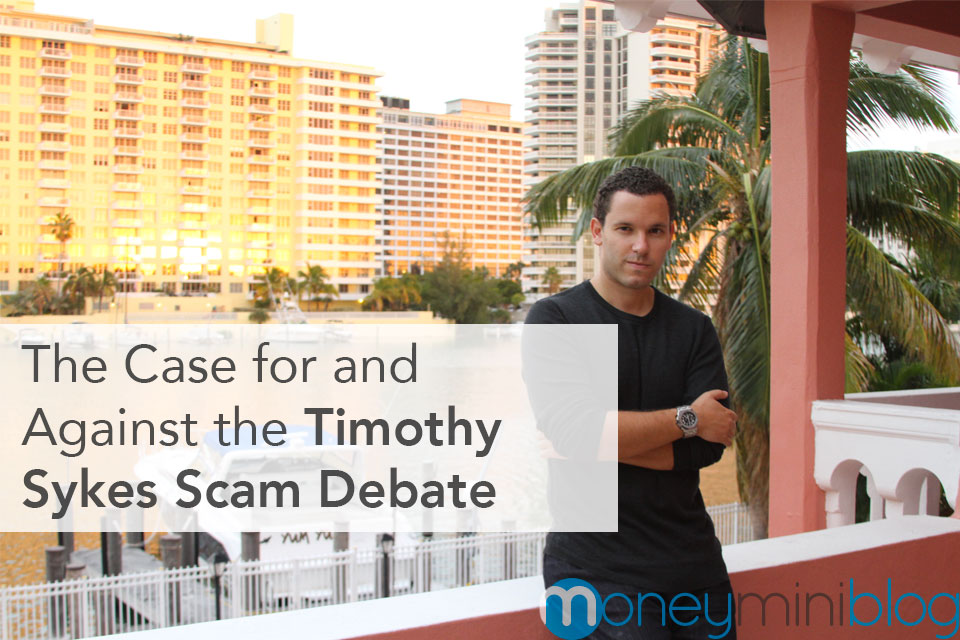 Note: As with any review of an individual, such as our review on Robert Kiyosaki or Tai Lopez, you have to come to your own conclusion. Here’s an opinion piece to help you make that call.

I have always known that penny stocks have a bad rap on Wall Street because their underlying companies are not subject to stringent disclosures applicable to stocks listed on standard exchanges. Penny stocks also lack liquidity, there are compelling allegations of market manipulation, and some penny stocks have been outed as outright fraudulent enterprises.

I signed up for his PennyStocking training program to separate the substance of his story from the noise of feel-good reviews and antagonistic diatribes. This piece is my attempt to objectively present the arguments for and against the narrative that Timothy Sykes might be a scam. I’ll leave you to make your conclusions by the end of the piece.

Who is Timothy Sykes?

Timothy Sykes is a millionaire stock trader and entrepreneur who has gained global acclaim for turning $12,415 into more than $5 million on the stock market. His story has been featured on The New York Times, Forbes, CNN, and Bloomberg, among others. He’s also been on Steve Harvey’s show, he has explained his strategy to Larry King, and he’s been featured on Fox News’ “You Built That!

His parents gave him his Bar Mitzvah gift money totaling $12,415 with an understanding that he would waste it, and they were hoping that he will learn important lessons about the value of money. In an interesting plot twist, young Tim took the money to the stock market, turned it into more than $200,000 within two years; and now, his lifetime profits as a trader exceeds $5M.

The case for the Timothy Sykes Scam argument

Timothy Sykes has a polarizing personality that you’ll either love or hate. When I first came across him, the fact that he is trading penny stocks and his lavish lifestyle conjures images from the Wolf of Wall Street movie and I wasn’t quite sure if he is the real deal or a charlatan.

His Instagram feed has him displaying fast cars, travel to exotic locations, huge mansions, and wads of cash. For many people, his lifestyle doesn’t quite conform to the image of Wall Street types who wear suits and take the Subway.

Secondly, Timothy Sykes has a net worth about $15 million but he has only made a little over $5 million in trading profits. Hence, many people are genuinely worried that Tim makes more money from teaching people how to trade penny stocks rather than from trading penny stocks himself.

The case against the Timothy Sykes scam argument

Conversely, it would be grossly unfair to call Timothy Sykes a scam just because he chooses to live a flamboyant lifestyle.  I have heard him mention consistently that his lavish lifestyle was necessary to inspire the next generation of traders to aspire to success. And his 1.5 million followers on Instagram shows that he is indeed inspiring people to greatness.

Secondly, you can counter the argument that he makes more money from teaching than trading by reviewing how he has evolved over the years. Granted Tim started with a flamboyant lifestyle that flaunted his wealth, but he has since mellowed down and spends more of his time teaching people how to achieve the same success. Hence, the fact that he spends less time trading and more time teaching accounts for the difference between his trading and teaching income.

Based on my experience, watching his videos & DVDs, and reading his books, Tim is an excellent teacher despite his tough love demeanor. And the more interesting fact is that some of his students have gone on to record bigger trading successes because they spend more time trading than he does. That’s what it comes down to: if you’re willing to put in the time, you can be successful, but it does take a lot of time.

Timothy Sykes is the founder of Profitly, a social-trading platform designed to introduce transparency, accountability, measurability and data-driven optimization to the trading financial assets. Profitly also functions as a trade verification software where you can confirm the trades and performance of other traders. One of my favorite features of Profitly is its “Chat” feature where you can see real-time commentary on the trades that Tim and other people in the community are making.

Profitly also allows you to find a guru for personalized training, you can visit the store for DVDs and books to learn and your own pace, and you can securely analyze your trades to make better decisions in the future. Through Profitly, you can access three of Tim’s training programs namely;

Tim’s Alerts cost $74.95 per month, it gives you access to the chatroom, you’ll get a stock watchlist, get trade alerts, and you can access it via the web, Android or iOS Apps. If you opt for the yearly plan, you’ll get a 24% discount. If you are still unconvinced that Tim is the real deal, I suggest starting with one month’s subscription to Tim’s Alerts.

However, if you want to get the best out of the education that Tim has to offer, I think you’ll be better off with the PennyStocking Silver plan. In addition to the feature of Tim’s Alerts, PennyStocking Silver gives you access to a comprehensive lesson library with more than 6000 videos. You also get weekly video lessons detailing Tim’s thoughts on specific stocks, the general market, and how he plans to take advantage of market sentiments. It’s quite a bit of content, really.

Tim’s Challenge is somewhat more demanding; in fact, you’ll need to go through an application and interview process. I personally think that you shouldn’t bother taking Tim’s Challenge unless you want to become a full-time trader, or you want to pursue the millionaire trader goal.

That said, Tim’s Challenge provides you with an immersive and more personalized learning experience with Tim. Besides the access to all the features of PennyStocking Silver, you’ll get a specially curated 60 video intro courses, commentary, access to Tim’s open trades, webinars, and much more.

Is Timothy Sykes a scam? As I see it the answer is a solid NO! He is a successful stock trader and he is honest about both his wins and his losses. More importantly, his teaching is impactful, and he has a long list of successful students to show that his method works. While penny stocks are extremely risky, they can be rewarding. Just know going into it that you need to have a plan first.

Nonetheless, Tim’s methods may not be for everybody because he focuses on teaching you how to make the right trading decisions instead of making the decisions for you. If you are looking for a guru whose trades you can copy, I’m afraid you might find it hard to succeed with Tim. Ultimately, you have to make the decision for yourself.