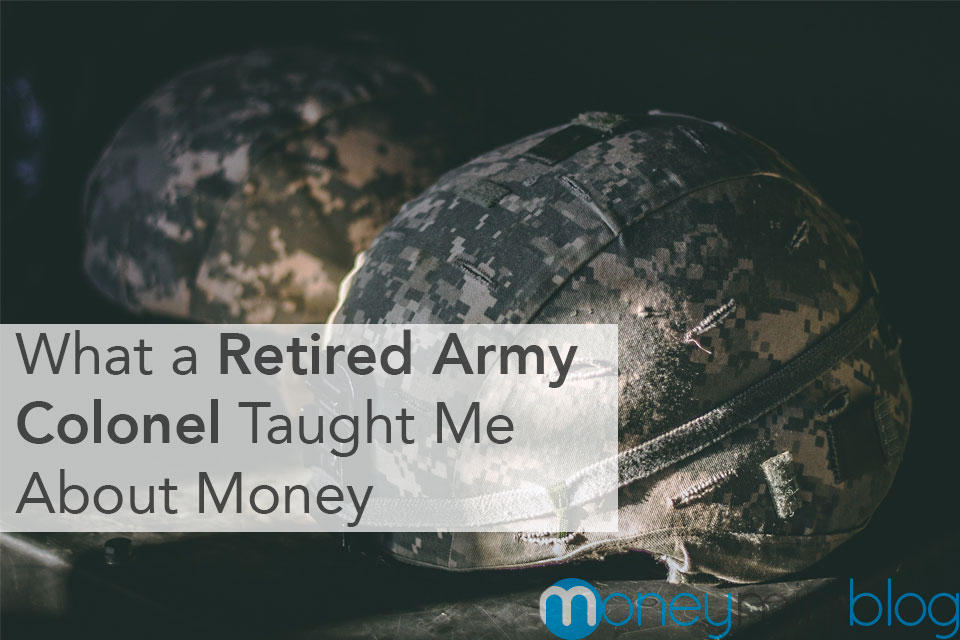 As a military member myself, I’ll be the first to say that most active duty service members have no idea what they’re doing when it comes to their finances.

It’s true that most people in general don’t have a clue, but it almost seems worse in the military.

That being said, when I do meet someone in the military who shares my love of finances, it’s an automatic friendship.

With 20+ years in the service, Eric knows a thing or two about the military and he also knows about money. That’s a rare combination, which is what makes him so interesting.

Here’s what this retired Colonel taught me about money…

The Life of Eric

Eric enlisted in the Army at a young age. He quickly decided that he wanted more out of the military and wanted to give more to the military so he obtained his Bachelor’s degree and commissioned as an Officer in the United States Army.

He served 22 years on active duty and retired as a Lieutenant Colonel (O-5).

I was first introduced to Eric through my commander. My commander knows I’m a finance nerd, so he thought Eric and I would have a lot in common. He was right and here is what I quickly learned from him…

1. The Science and the Art

I’ve heard a similar idea, but I’ve never heard the terms the “science” and the “art”, as applied to finances. Here’s how Eric explained it to me…

When you make a financial decision, no matter how big or small, you have two sides to it. There’s the science, which is the actual, real, mathematical hard numbers – this is the decision “on paper”. Then you have the art, which is the more emotional side – how it makes you feel and the emotional benefits.

When you make a financial decision, you should consider both. Now I’m not talking about being emotional versus being logical. Successful investing often requires you to block out your emotions and use pure logic. I’m speaking more about purchases and spending. You’re always going to have two sides to every purchase.

And it’s okay to go with the art sometimes.

Here’s an example, as it applies to situations of debt reduction. Consider the debt snowball and the debt avalanche. The avalanche will generally save you more money by paying less overall interest, but the snowball will create small wins in the beginning, which helps you to stick with it. And like most things, a good method that you stick with is better than the best method that you don’t.

2. There is Always an Opportunity Cost

Opportunity Cost – The cost of an alternative that must be forgone in order to pursue a certain action. Put another way, the benefits you could have received by taking an alternative action. (Investopedia)

We recently had a pretty serious mechanical issue with one of our vehicles, so we decided it may not be worth fixing and we should looking into buying a different vehicle.

I decided to run the idea by Eric and get his input. Of course, he had some very insightful advice.

I told him that we hated debt and wanted something we could pay cash for, no matter what. He said that he understood and then asked me how much we had saved for the purchase. I told him right now we really only have around $5,000 specifically to go towards a new vehicle.  We have investments, an emergency fund and other savings, but that was all that was designated for a vehicle.

It seems simple and he laid it out in a way that was more clear than ever. He actually completely shifted my thinking. I used to be 100% against debt no matter what, but I can now see that sometimes debt actually makes more sense than the alternative, especially in a situation like I just mentioned. I have really good credit, so I could get an extremely low interest rate on a nice vehicle and end up paying less than a couple hundred dollars in interest over the entire length of the loan. Think of it as a $200 comfort tax; it might just be worth it.

Similar to paying off a mortgage, this is like how it sometimes makes more sense to invest rather than paying extra on your mortgage, depending on each interest rate (More on that here, here and here).

When my commander introduced me to Eric, I initially told him that I would love to be a financial advisor and I was considering applying to work at First Command. Eric’s response surprised me.

He said “you remind me of me when I was your age and I felt the same way, but don’t do it yet – do your 20 and then join First Command after you retire”. If you don’t know what “do your 20” means, Eric is basically telling me to stay in the military for 20 years so I can retire.

I admit that I was a little disappointed that he told me to wait. That’s four times longer than I planned to wait to start my financial career, but then he explained it to me. He said “I did my 20 and retired. Now I have a pension coming in from the military that’s the equivalent of earning 6% off a $1 million nest egg – and that doesn’t even include my actual retirement investments.”

That’s when it really hit me. Benefits really can outweigh pay or money in general.

I’ve added up my income before, including housing, food allowances, insurance, education benefits and everything else we are so lucky to have in the military. As a lower ranking Enlisted member, I make the equivalent of a fairly high six figure income, when benefits are weighed in. Benefits really do have their…benefits.

Now I’m not saying that you should count on a pension, even from something that seems as secure as the military, but if you can work towards something like that, it may benefit you more than just earning more money will.

The bottom line is this: Don’t disregard benefits. Add your benefits into your income to figure out your “real” pay. Weigh different job opportunities with benefits included.

I love learning from others, especially those who are more knowledgeable than I am. That’s the best.

I’ve developed a friendship with Eric, so you may even see a part 2 in the future. I hope you took something away from this!

Which lesson is your favorite? Do you like this series and want to see more? Let me know below!