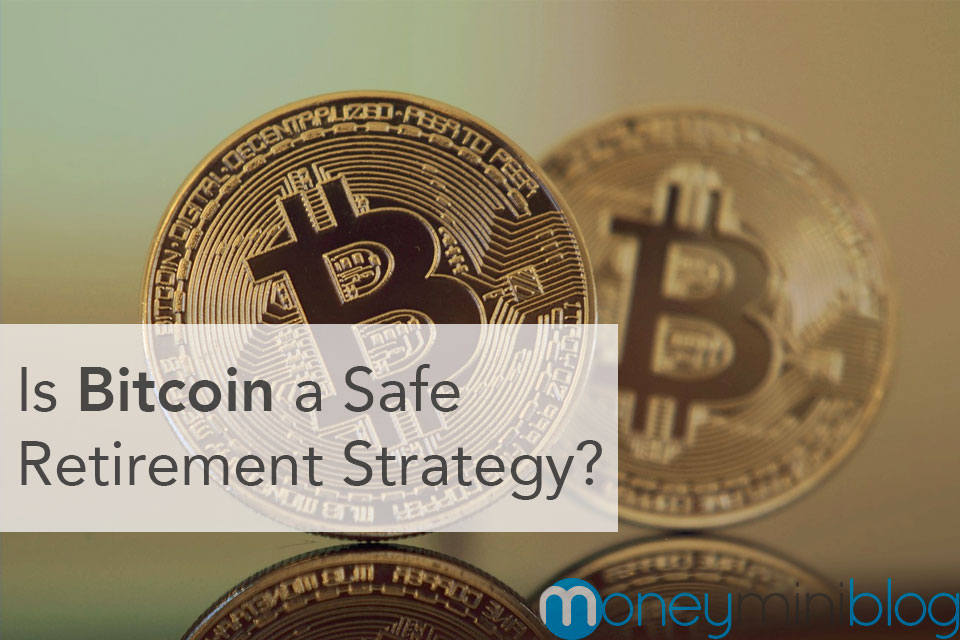 Note From Kalen: You’ve heard a lot about Bitcoin and other cryptocurrencies lately. I want to push out as much info as I can on it, since it’s such a hot topic right now. Geoffrey, from RETIRETY, shares some insight on using Bitcoin for your retirement. Is it a good plan? Read on to find out…

You’ve probably heard a lot about bitcoin in recent weeks, if not days. Most financial sites and newspapers have their top headlines about bitcoin.

Bitcoin seems exciting, popular, and people are becoming “Bitcoin Millionaires.” At the beginning of the year bitcoin was below $1000 and recently, it nearly hit $20,000, though at the time of this writing it has dropped. To make you feel even worse, back in 2010, bitcoin was at 6 cents, so a $100 investment would now be worth a high of $28,341,266. The zeitgeist has bitcoin as an unstoppable force that everyone is profiting from.

So if you’re in or near retirement, should you consider bitcoin?

Bitcoin is a digital currency, or cryptocurrency, that is not associated with any government, institution (like a bank), or other entity. Created back in 2009 by the enigmatic Satoshi Nakamoto (we don’t know if Satoshi is an individual or a group), he wanted to establish “a new electronic cash system” to be “completely decentralized with no server or central authority.” The system is a network of computers all over the globe that work together to maintain the ledger of bitcoin transactions. A lot of computer power goes into this verification of the bitcoin ledger, and those willing to contribute to the effort get paid in bitcoins (called mining).

Overall, bitcoin acts in many ways like any other currency or stock. The more people want to own bitcoin, the more it is worth. The supply of bitcoins is also limited; there are only 21 million bitcoins available and so far, almost 17 million have been mined. However, bitcoin isn’t the only cryptocurrency. In fact there are 1,400 other types of cryptocurrencies, such as Ripple used by banks to transfer money.

What Can Bitcoin be Used for?

Surprisingly a lot, and the list keeps growing. For example, you can purchase software at Microsoft, buy a sandwich at Subway (in Buenos Aires), or book a hotel on Expedia all with bitcoin. However, even though more places accept bitcoins, it is rarely used for day-to-day transactions anymore. Why? This story of a developer buying a pizza for 10,000 bitcoins back in 2010 — pizza now worth over $20 million — helps explain why people are reluctant to buy groceries with potentially King Solomon’s wealth.

More often, people buy and sell bitcoin on exchanges, just as you would a stock. A popular one in the U.S. is Coinbase. And recently, bitcoin futures debuted on the world’s largest futures exchange (CME).

Let’s rewind for a moment back to the 1600s in Holland for a tale of speculation. As Investopedia relates, “The Dutch tulip bulb market bubble is to this day one of the most famous market bubbles of all time, as well as a cautionary tale. It occurred in Holland during the early 1600s when speculation drove the value of tulip bulbs to extremes. At the height of the market, the rarest tulip bulbs traded for as much as six times the average person’s annual salary.”

The tale continues, “By 1636, tulip bulbs were traded on the stock exchanges of numerous Dutch towns and cities, encouraging all members of society to speculate in the markets. Many people traded or sold possessions, including properties, to participate in the tulip market mania. Like any bubble, it all came to an end in 1637, when prices dropped and panic selling began. Bulbs were soon trading at a fraction of what they once had, leaving many people in financial ruin.”

“Good morning sir. Yes, I would like to sell my home for a piece of greenery.”

People were trading their entire estates for a single tulip bulb. Fortunes were made and lost on what you can now buy at Home Depot Garden Center.

Financial advisors say no, especially when it comes to your retirement. Mark Hulbert, a financial analyst, said there’s a greater-than-80% chance bitcoin will crash in the near future, looking at asset prices in the past that have soared. William Brancaccio, a financial adviser at Rightirement Wealth Partners in White Plains, N.Y., says your retirement should grow “slow and steady” and “bitcoin may make you 100% in one year and the next you can lose 90% of that, which includes part of your initial investment.”

Slow and steady wins the race for retirement.

If you’re wondering just how risky Bitcoin is, just look at the past fews weeks — Bitcoin and other major cryptocurrencies have dropped over 50%. You read correctly; over half the value gone in a few weeks.

In other words, if you take your retirement money and put in on red at the roulette table, you might walk away a winner, but can you risk walking away a loser? For your retirement, the typical advice is slow and steady wins the race.

But I Really Want to Get in on Bitcoin!

What can you do if you really want to get in on bitcoin? Same as you would playing the lottery.

If you have non-essential cash you are ok to lose, go ahead and have some fun and buy bitcoin or one of the many other variations. Treat it as entertainment, but also consider other alternative investments if you want to go beyond stocks and bonds.

Just be absolutely sure this is expendable money and isn’t needed for your retirement.

You don’t want to end up with the greenery instead of the estate.

About the Author:
Geoffrey Bourne is the CEO and founder of RETIRETY — helping people in or near retirement find a better way to retire.