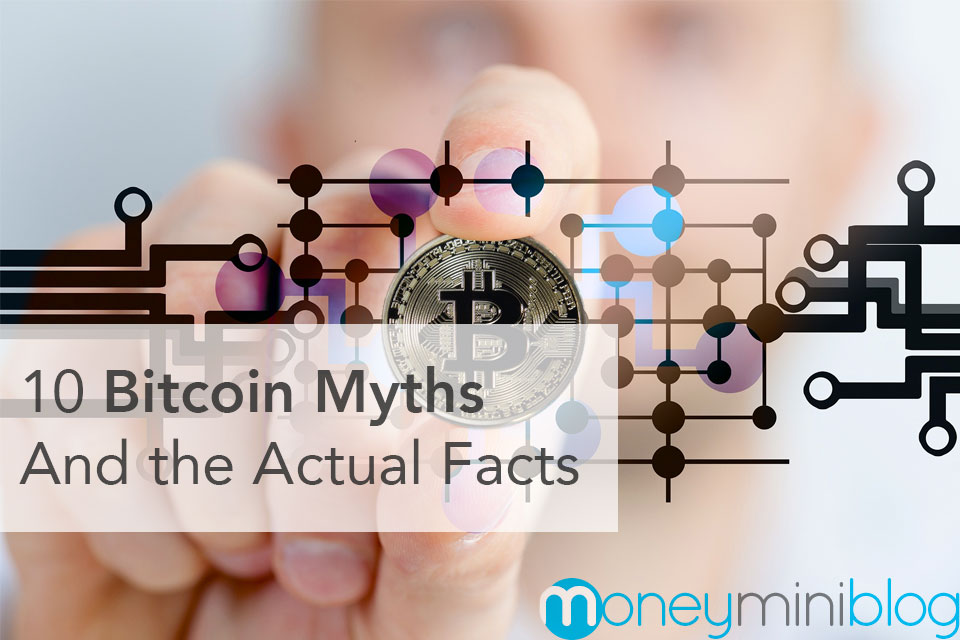 Bitcoin is one of the hottest things for investors today.

However, there are plenty of myths surrounding this form of cryptocurrency.

Some people have formed wrong notions of this cryptocurrency due to disinformation and ignorance about this technology.

For those people, we bring here a list of myths that you should stop believing:

1. There Is Absolute Anonymity With Bitcoin Users

While we agree that there is some element of anonymity with Bitcoin users but it is not absolute. When Bitcoin users engage in a payment transaction, they leave behind a pattern in their blockchain. So Bitcoin users are not beyond the reach of the law.

Besides, when the users seek the services of Bitcoin exchange services, they have to share their personal details for record purposes. So they certainly have a paper trail that can be traced.

2. Bitcoin Will Be Used Like Credit Cards in the Future

This is another myth regarding Bitcoin. However, it is not true for the simple fact that Bitcoin transactions can’t be processed as quickly as the vast credit card networks that operate around the world. In addition, there is a huge amount of fee that goes into every transaction of Bitcoin which can cost up to $400.

Currently, Bitcoin lacks the technological feasibility to replace the globally-operated credit card system that serves people day in and day out.

3. Bitcoin is a Ponzi Scheme

That’s not true. Going by the definition of a Ponzi scheme, Bitcoin is neither operated by any investment firm nor does it have a centralized management or regulatory body that controls its production or consumption. It can be produced by anyone using the blockchain system and he has the authority to sell or purchase any number of Bitcoins at any time without the influence of a centralized authority.

According to Bitcoin, a single Bitcoin costs around six thousand dollars. Since it is the cost of one Bitcoin, it certainly has a high exchange value. But if it is too much expensive for you, you can still buy a fraction of Bitcoin at a cheaper rate. It is similar to buying a currency.

If you live in Uganda and want to buy a dollar bill, it will cost you around 3826 Ugandan Shilling. But if you can’t afford to buy it, you can still buy the cent at a much lower rate. The same logic applies to Bitcoin exchange. The smaller unit of Bitcoin is Satoshi. So if you want to trade in Bitcoins, you can get some Satoshi to make quick money.

While Bitcoin showed a volatile trend for some time after it was out in 2009, it has maintained a stable trend since 2014. To get a glimpse into its growth over the years, let’s take a look at this graph by Statista.

As you can see, the price index of Bitcoin increases gradually until the third quarter of 2017 and it gets inclined abruptly in the fourth quarter of the same year. It has witnessed a gradual downtick since then. But this is how the market behaves when a commodity sees a sudden rise and fall. The trend of price index has recovered since then and is back to normal.

6. Bitcoin is a Source For Illegal Activities

Many people believe that Bitcoin encourages illegal activities but it is not always true. Part of this myth is associated with the element of anonymity that is required in Bitcoin transactions which help people in the black market to engage in illegitimate activities.

But then such acts can be done with fiat currencies as well. The issue is not with the mode of currency but the nature of activity and the people who use this form of currency. Just like there are laws and rules to control illegitimate transactions through fiat currency, there should to be laws for this digital currency as well. Once the laws are implemented, the law enforcement authorities will be able to keep an eye on any illegal activities.

7. Bitcoin Users Are Prone to Theft and Fraud

People who deal in Bitcoins have a fear of getting ripped off their money. The root of their fear is connected with the vulnerability associated with their personal information. This makes many people think that using Bitcoins compromise on their privacy.

On the contrary, Bitcoin offers a more secure payment transaction than the fiat currency. The use of intricate blockchain system makes it almost impossible for any conman or crooked element to get access to your personal data and exploit them to steal your money.

8. Bitcoin Consumes Too Much Energy

Well, the amount of energy that Bitcoin consumes is significantly much less compared with what the traditional financial institutions utilize every year. Let’s take the example of banks and the energy they consume in delivering the services to their clients – staff management, transportation, back office services, and security.

9. We Cannot Use Bitcoins to Make Payments

Bitcoins are accepted as a payment method by a number of online businesses. There are many online stores that accept Bitcoins as a mode of payment including companies like Microsoft, Shopify Stores, Expedia, and Overstock.com.

To facilitate people, many countries even offer Bitcoin ATMs that users can use to exchange Bitcoin and hard money. According to Statista, there are 3,661 ATM machines that are available throughout the globe.

10. The Inventor of Bitcoin was Arrested

On December 9, 2015, a new was published in Wired that reported that Australian police raided the home of Craig Wright who was purportedly the man behind the invention of Bitcoin. The house of the academician was raided after a hacker got access into the email account of Craig Wright and accused him to be the Satoshi Nakamoto. However, it was later revealed that it was a hoax that was planned by Craig Wright to gain publicity.

On March 6, 2014, a similar case was published in Newsweek magazine. The magazine identified Dorian Prentice Satoshi Nakamoto as the mysterious man who was responsible for the creation of Bitcoin. He was a computer scientist who was living in California.

His involvement was doubted after he gave an interview to Newsweek Magazine journalist in which he claimed to be the creator of Bitcoin. However, he later denied the claim and termed it as a misquoted statement.

Bitcoin is an enigma for many people who want to make an investment in this currency. These myths are some of the many wrong facts that people believe about Bitcoins. Hope it clears your confusion regarding this digital currency.

About the Author:
Ishika Agarwal is an investment guru and blogger at Jaunt Monkey. She is also a financial blogger who likes to write on topics related to financial trends, economic markets, and making money online. In addition, she is a known figure among students who regard her as a mentor and guru. She is an avid reader of financial magazines like Fortune, Forbes, and The Economist.