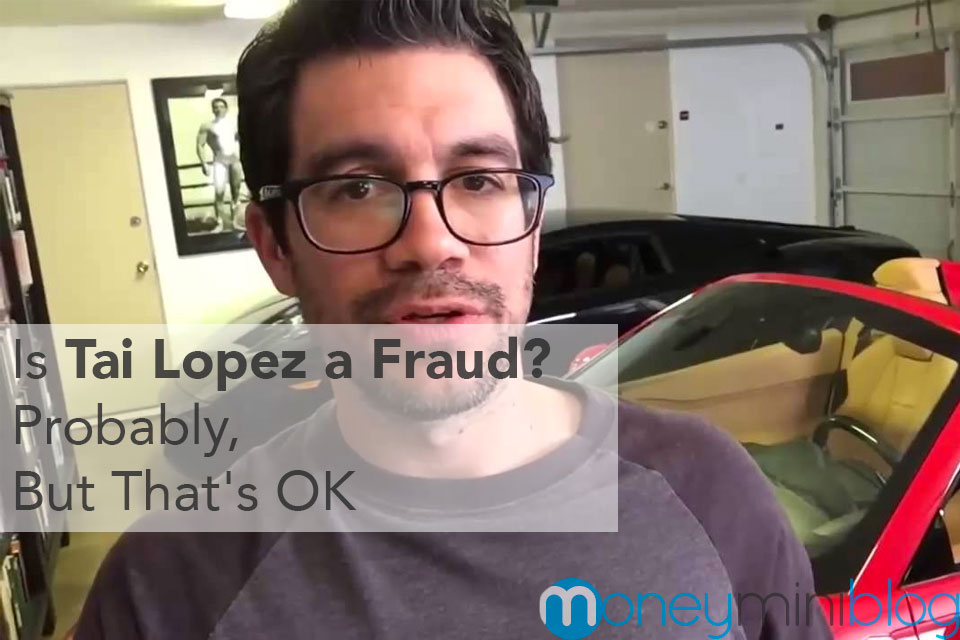 Have you seen Tai Lopez in the YouTube videos?

His ad pops up on every YouTube video, or so it seems.  He’s usually standing by a mansion.

His latest video starts with him saying:

“Hey, I’m here in my backyard.  People are always asking me for a tour of my house…” 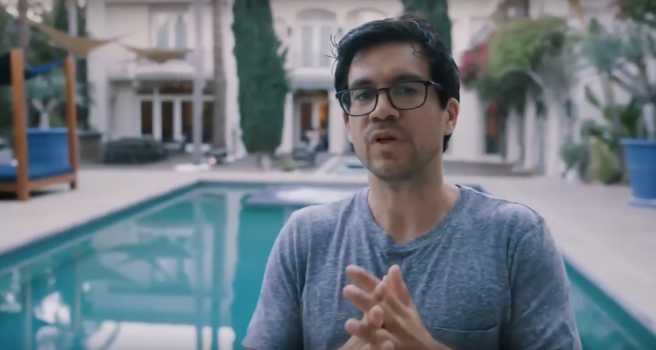 I’m sure you’ve seen it.  Everyone has seen it.  Unless you have ad block.  So is this guy for real?

I’m going to give my take on that, show you some evidence, show you exactly what Tai does and what you’ll get when you buy his product, and how to get most of what he sells for free.

Note: This may be a unique article compared to other articles about Tai Lopez.  I always try to see all sides of any given situation, as you noticed in my article about Robert Kiyosaki.  I’m not one to quickly jump to conclusions, and I don’t like to be so strong about my opinion that I can’t listen to someone else’s point of view.

Who is Tai Lopez and What Does He Do?

Tai Lopez is an internet celebrity at this point.  He poured A LOT of money into a YouTube campaign, which successfully exploded.  He is now a multi-millionaire from his internet business (net worth of $5 or $6 million).

So what is his business?  Like thousands of others, he runs a personal development business that offers many different ways to improve your life (Tai calls it “achieving the good life”), and ultimately the idea is that you would become wealthy from what you learn.  The first thing you will be prompted to buy is his 67 step program, which currently costs $67.  In this program, Tai goes through 67 different success principles, in the form of 67 lengthy videos.  Before we go on, I want to point out that these videos shouldn’t be lengthy.  Tai has a tendency to ramble, turning a two minute point into a 30 minute video.  You can get an idea of what I’m talking about by checking out the free videos on his blog, or on YouTube.

Social News Daily points out that you can get practically the same advice from Jack Canfield’s book with 64 success principles, which only cost a couple dollars.  That’s a lot better than $67.  From what I’ve read, Tai’s 67 step program used to be free, then at one point it was $5.  I assume the price has continued to gradually increase to $67.  Tai does offer other products, including a dinner with him and meetings with his coaches, but those things are well into the hundreds of dollars.

On a side note, There was a pretty funny website that completely mocks Tai Lopez.  A different guy is mimicking Tai’s videos and claiming to be selling a 68 step program.  I don’t think he is set up to take your money, but make sure you don’t give it to him.  It’s just a joke. Here’s a screenshot from that website before it went offline…

Oh yeah, and Tai is also know for “reading a book a day.”

Does he really read a book a day?  Kind of, and by kind of, I mean no.  But he does read a book summary, skim through a book, or read a couple chapters out of a book everyday.  Which is still pretty good.  I think we could all benefit from doing that; however, it’s not completely accurate that he reads a book a day.  Tai has a tendency to do that — stretch the truth.

To the Point: Is Tai Lopez a Fraud?

A fraud, by definition, is defined as “an act of deceiving or misrepresenting. (1b)”  Basically, someone who tricks people into believing something that’s not true, or someone who is simply not what he pretends to be.

By that definition (which is the actual definition), Tai Lopez is probably a fraud.  Why?  Well, all of the evidence isn’t in, but it does appear that he does not actually own the mansion in his popular video.  So saying “I’m going to give you a tour of my house…I’m here in my backyard…this is my living room…etc.” makes him a liar.  Since he is trying to sell you on the fact that he is living a certain lifestyle, when he is not, he is a fraud.

That being said, he usually doesn’t lie outright.  He usually tells partial truths, or simply exaggerates, which just makes him a good salesman perhaps?  I’m not trying to point fingers, but I definitely get an uneasy feeling.

So how do I know that he is lying about the mansion?  Well, I don’t for sure, but this YouTube video (Warning: vulgar), which is really funny and sarcastic, makes some good points that lead me to believe Tai rented that mansion for the videos (and apparently for like a thousand other videos).  The home supposedly rents for $75,000/month, and Tai seems to have been renting it for a while.

So why do I say that it’s OK for him to be a fraud?

Honestly, though there are better places to get the information from, Tai does have a lot of good information.  I’ve read countless success stories of people who have followed his advice and increased their success.  There is obviously some value to his product or he wouldn’t be doing as well as he is, but just because he’s doing well, that doesn’t mean he has the best product.

If you’ve already bought his program, get the most out of it.  Watch the videos.  Take notes.  Get your money’s worth.

The program has value, it’s just overpriced.  And presented in video form, by a mediocre speaker.

Why I Am Not Buying His System

Yes, he’s probably lying about the mansion thing.  He may be a con artist to some extent.  But honestly, I decided not to buy his products before I figured all of that out.  Why?  Because he’s not selling what I want.

I watched a few videos of Tai live on Facebook, and realized that his entire philosophy is about being rich, owning expensive houses and cars, and other superficial things.  At least, that’s the way he comes off in his ads.  In his videos, he tends to surround himself with attractive, minimally clothed girls who look like they would rather be anywhere else in the world.  Are they being paid?  Maybe.  But the fact that he thinks he needs to show you all of that in every video is sad.  I don’t want that life.

When I clicked to actually see about buying his products, as soon as I saw the [probably fake] Facebook and Twitter reviews, I knew something wasn’t right.  And then BOOM!  What appeared?  A countdown timer telling me I had 10:44 left to make the purchase.

Well, I didn’t make it to the checkout.  I made it to the little read button in the top of my browser. 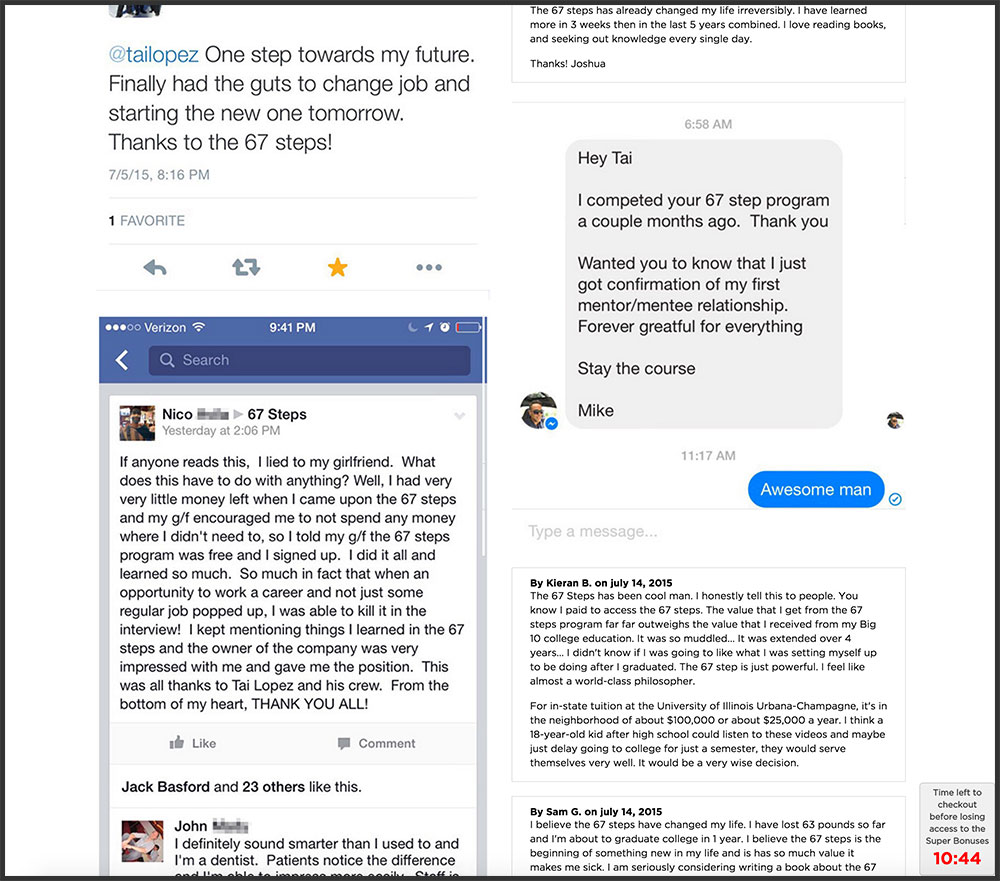 Every product needs to be sold.  I realize that.  But when you go to great lengths, like having a countdown timer and 100+ reviews, for a $67 program, there has to be a reason.  How many people would have searched for reviews on Google or read more about the program, if the countdown timer hadn’t popped up at the bottom?  A lot, actually.  Believe it or not, most people actually believe that they only have that amount of time to buy the product, and there will never be another opportunity.  Obviously that’s not true, but people believe it, and it makes them buy.

The funny thing is, I actually like Tai.  I like his videos.  I’ve watched several hours of the free videos he offers.  I don’t believe the 67 steps program is a bad program, and I’m not even saying you shouldn’t buy it.  It may work for you.  Honestly, if it was free, I would definitely watch the videos, because he does have a lot of good things to say.  He also has an awesome big-thinking mindset; I just think he gets it wrong on the material side of things.  But that’s me.  If you think those things are important, then you may have no problem with him, and in that case, go for it!  Buy the program.  And maybe he will prove us all wrong about the mansion thing, and show the world that he hasn’t lied about anything.  It could all be a bunch of crazy coincidences.  You never know.

One last thing, how can you get most of Tai’s program for free?  Simon, from Basic Growth, wrote an elaborate review on Tai’s program that includes [at the moment] 21 of the 67 steps, but these are the 21 steps that Simon felt were the most relevant.  If you read Simon’s review, you’ll get most of what Tai’s program has to offer.  If you buy Jack Canfield’s book, mentioned above, you’ll have more than everything Tai offers, and it will cost you a total of about $3 or $4.  That’s a good deal.