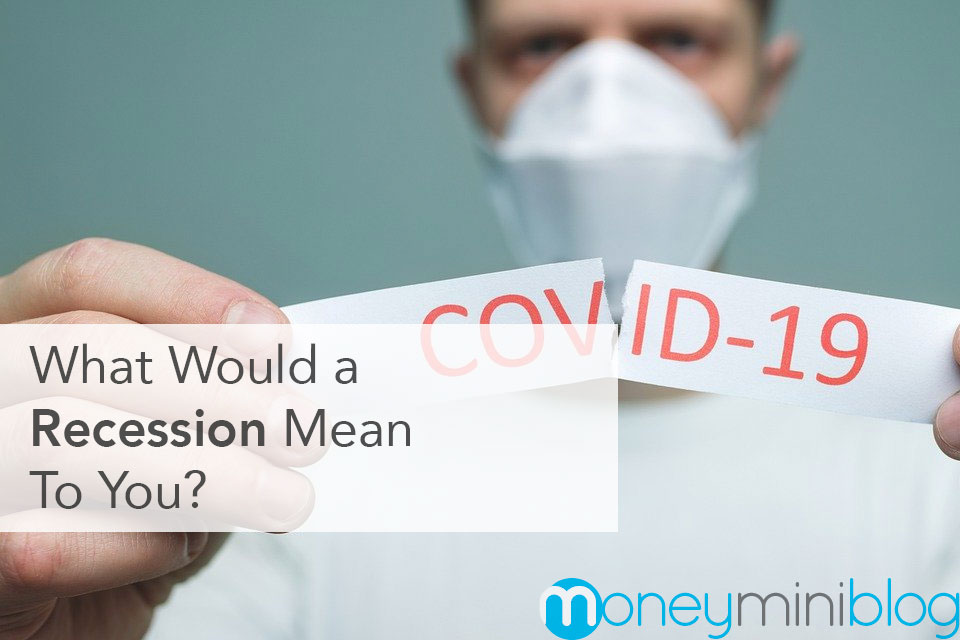 A recession is a cycle when the economy slows down for a period of months, with less production and other activities leading to job losses, diminished business profits, a decline in the housing market, and a drop in the stock market. Recessions can be caused by a pandemic, a sudden drop in essential supplies, the bursting of an economic bubble, or another kind of national or global financial crisis.

Typically, governments respond by lowering interest rates (good for getting credit and paying off loans, not so good for investors), broadening unemployment and other benefits, and applying other measures to keep money flowing and bringing the economy back into balance.

The people most clearly and immediately affected by a recession are those who have their work hours cut back or lose their jobs entirely. Apart from the significant personal repercussions, someone whose income has gone down is going to be spending less on goods and services and thus contributing to the snowball effect of reducing economic activity overall.

Even if unemployment isn’t an issue for you, we’re all affected by a recession in one way or another. Retirement accounts invested in the stock market lose value, even if temporarily, and homes can drop in value because potential buyers are reluctant to spend top dollar if not pulling back entirely. Not really surprisingly, one of the most enduring effects of a recession may be emotional, with anxiety and depression lasting for years after economic recovery.

Adding to the pressure of the current pandemic, most of us who are able to have to stay at home with limited access to banks, stores and the other places we’re used to going. In many cases, those establishments aren’t open at all. Fortunately, there’s home delivery of food and other items and it’s easy to send money online with your debit or credit card or directly from your bank account.

While we weather this storm together, here’s some good to know information about recessions:

What Determines A Recession?

Generally, a recession has been recognized as two consecutive quarters of economic decline as reflected by the GDP (gross domestic product), a monetary measure of the market value of all goods and services produced in a specific time period. The National Bureau of Economic Research, a nonprofit organization that determines the starting and ending dates of recessions, defines a recession as a significant decline in economic activity spread across the economy, lasting more than a few months, and normally recognizable in real GDP, real income, employment, industrial production, and wholesale-retail sales.

Why Do Recessions Happen?

For several hundred years since the Industrial Revolution, the long-term trend has been toward economic growth. In fact, the U.S. economy has been experiencing an economic expansion for over ten years since the end of the Great Recession in June of 2009. Recessions are normal downturns in that trend and part of the overall business cycle. Apart from obvious crisis situations, there are a number of theories as to why recessions occur, based variously on economic, financial and psychological factors.

What’s The Difference Between A Recession And A Depression?

A recession is a relatively short term contraction of a business cycle, while a depression is more severe and can last for years. The Great Depression lasted over three and a half years from the stock market crash in August of 1929 through March of 1933 and echoed throughout the country until World War II. A generation of Americans and others across the globe were deeply affected by it.

How Long Do Recessions Usually Last?

Economists count 33 recessions in the United States since 1854, with the worst being the Great Recession caused by the collapse of the real estate market that lasted eighteen months, from December 2007 to June 2009. The other ten recessions since the post-war slump in 1949 have lasted six to sixteen months, with an average of about ten months.

What Is The Outlook?

The International Monetary Fund expects a worldwide recession in the wake of the coronavirus pandemic, but predicts a recovery in 2021. IMF Managing Director Kristalina Georgieva cited the “extraordinary fiscal actions already taken by many countries to boost health systems and protect affected companies and workers”, and steps taken by central banks to ease monetary policy. “The economic impact is and will be severe,” she said, “but the faster the virus stops, the quicker and stronger the recovery will be.”

These are not pleasant times, but knowing the what and why of recessions can help us understand how our economy has survived them before and will again.