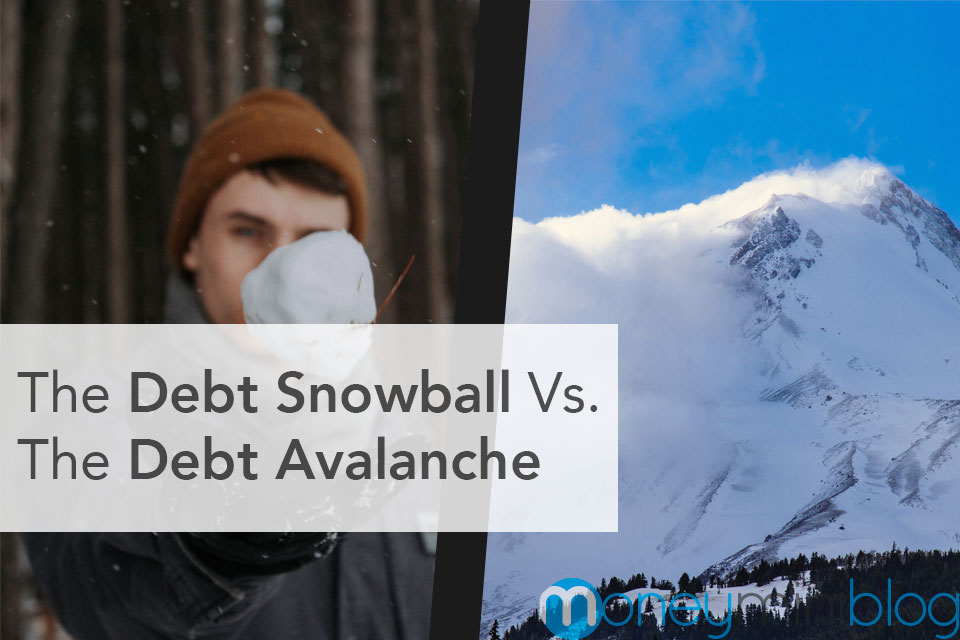 If you want to be debt free, you need a strategy.

The average US household has $54,000 in credit card debt.

If you’re in debt, you really need a plan.

The good news is that you have more than one option.

There are several ways to get out of debt, but the two most used ways are called the debt snowball and the debt avalanche.

I’m going to go over two methods for paying off debt.

There is no right or wrong here. It depends on you and your situation.

I used the debt snowball to get out of debt and it worked for me. That’s what’s important…it worked!

If you become debt free, you win. It doesn’t matter which method you used once you are debt free.

The debt snowball and the debt avalanche are very similar. Here’s how they work:

You pay the minimum on all your payments, except one. Once that is paid off, you add that payment to the next debt. Either way, it turns into a snowball or an avalanche and your debt will melt away.

The difference is in the order that you will pay off your debt.

Let’s look at these methods in detail…

The debt snowball (made popular by Dave Ramsey) is a method for paying off all your debt by starting with the lowest outstanding balance.

You put as much money as you can towards your lowest balance, while making the minimum payment to every other account.

Example: Jim has four different debts to pay off. Two credit cards, a student loan and a personal loan.

The idea behind the debt snowball is to create a series of “small wins” and “early success.” This is especially true if you have several different debts to pay with low balances.

It’s generally pretty easy to pay off a few small balances, then you have all of that extra money to start adding to your other debts.

Also, if you have tried to pay off your debt before and failed, you may want to consider the snowball, because statistically, people are more likely to stick to it.

When you pay your smallest balance first, you don’t pay attention to the interest rates, therefore, you will end up paying more interest and it will take you longer to get out of debt.

If you’re all about the numbers and you don’t need the emotional support of having small wins, the debt avalanche may be better for you.

The debt avalanche is very similar to the debt snowball, except you pay off your debt in order of interest rate.

You put as much money as you can towards your highest interest rate debt, while making the minimum payment on every other account.

Related Book: The Money Book for the Young, Fabulous & Broke

Example: Remember Jim? Let’s use the same debts and order them for the debt avalanche. Two credit cards, a student loan and a personal loan.

You will also be out of debt quicker with this method, since you are attacking those high interest rates first.

You may not get the small motivational wins in the beginning.

If your highest interest debt is one of your largest, it may be a while before you really start to see progress.

What’s Best for You?

The debt snowball works great for someone with a large amount of small outstanding balances, because you will be quickly freeing up money to put towards other debt.

The debt avalanche works great for someone with a large amount of very high interest credit card debt that needs to be paid off quickly.

It also depends on your personality. If you know you need a lot of motivation, consider the snowball. If you are all about the numbers, consider the avalanche.

Don’t forget that money can be a very emotional thing. Too often, people argue their side with pure math. That’s not how money works. At least, not with personal finances.

Sometimes the right method may not make the most sense on paper, but if it works, you still win!