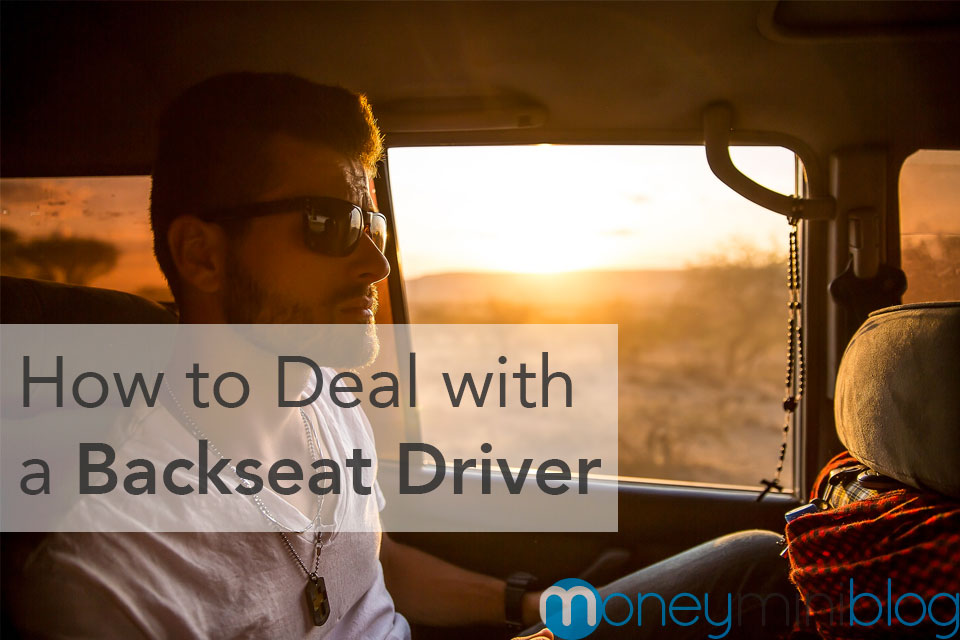 Note: This article definitely has nothing to do with finance, but I think it could tie into productivity. Either way, everyone has heard from a backseat driver at one point or another, and we need to put an end to the epidemic! Ok, maybe it’s not that serious, but here’s a fun read on how to handle them.

If there’s one thing I don’t like, it’s driving around town with my Dad when he visits. According to him, I brake too hard, sit too long at stop signs and drive (his words) like a grandma. Well excuse me for trying to be a safe driver!

Can you relate to this? There’s a term for people like this who have made it their mission to call things out as they see them. In the car, it’s called being a “backseat driver.” A backseat driver is someone who dispenses ‘helpful’ advice as you drive. It’s just that the advice isn’t helpful or useful, it’s annoying and distracting.

Distracted driving is one of the leading causes of death on U.S. motorways. The National Highway Traffic Safety Administration (NHTSA) estimated that there were over 3,179 deaths resulting from crashes caused by distracted drivers in 2014 alone, with another 431,000 people hurt.

While many people relate distracted driving to texting and making calls, there are other ways drivers can get distracted. Anything that distracts a driver from the task of driving is considered distracted driving. Disctraction.Gov lists talking to passengers as one of the major types of distraction.

Why Backseat Drivers Do What They Do

Life is tough. You don’t need another person in the car criticizing your driving and offering unwanted advice at every turn. Backseat drivers can’t seem to keep their mouths shut and let you drive. It can be unnerving.

However, let’s look at it from another viewpoint. Backseat drivers are often anxious. They make their seemingly snide comments out of concern for their safety. Unfortunately, this nervousness manifests itself in the form of criticism and the desire to take control. It’s important for the driver to understand that the behavior of their passenger isn’t to be insulting, it’s a way for the passenger to try and take control for their self-preservation.

5 Tips for Dealing with a Backseat Driver

Are you dealing with a backseat driver who just can’t keep their advice to themselves? It may be difficult to concentrate on your driving with such a person in the car. The following tips should guide you in dealing with this type of passenger:

If you’re going to be driving for a long time with your passenger, you should plan ahead. Backseat drivers are very nervous. A good way to calm them down and get some peace (even if for a short while) is to take various breaks along the way. Stop for lunch or to take in the view. This will steer conversation in a different direction and calm their nerves.

Many people engage in backseat driving because they’re bored. You can help to kill the boredom and distract your backseat driver by giving them something to do. If they’re so concerned with your driving, have them compare auto insurance quotes online for you. You can say, “if you’re really worried about ours and the vehicle’s safety, help me find a better policy. It’s a win-win.

If this is someone you drive around with often, then you need to talk about the effect their behavior is having on you. Tell them that although their advice is appreciated, it can be distracting when offered while driving. Be gentle and offer them the option of taking over the wheel as a means of solving the problem.

Do you drive too fast? Are you taking those bumps too hard? Did you actually almost hit the neighbor’s dog? Your backseat driver may be pointing out issues that are real. Be calm and consider these issues. You may want to change how you drive to improve safety.