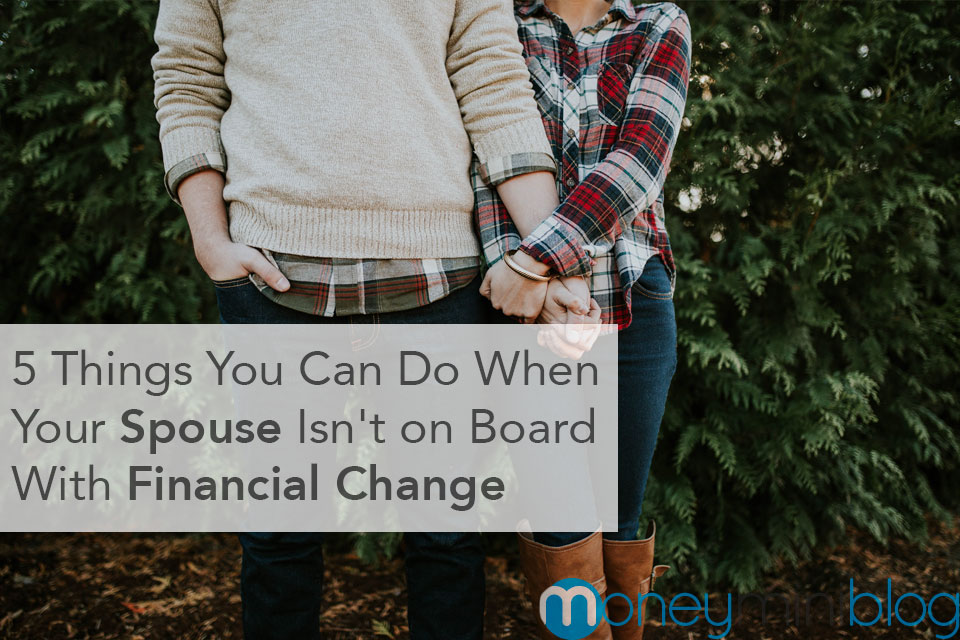 Communication issues over money is a leading cause for divorce.

Depending on the study, it’s often the #1 leading cause.

It’s not going to happen to you, because you’re better than that. But it is a sad stat for the rest of the world.

You’re here right now trying to learn more about handling your money. You’re headed in the right direction, because you already have a growth mindset. That’s most of the battle right there and you’ve already won.

There’s a good chance your spending habits are indeed different.

Typically one of you is the saver, and one the spender. I know this is true in my marriage, because I’m the spender.

Why Are They Not on Board?

This is the first question to ask.

There has to be a reason, and here are a few common ones I’ve seen:

These are a handful of the many reasons couples disagree on finances.

You’ll have to do your part in getting them on board.

You’ll also have to be financially responsible regardless of what they choose to do.

5 Ways to Get Your Spouse on Board

There are a few different things you can do to get your spouse on the same page, but the most important thing is to not give up. Just because they don’t want to better your financial future, that doesn’t mean you shouldn’t be doing your part. And often your part is huge!

Here are some things to try:

When a Stay-at-Home Spouse Wants Change

I devoted an entire section to this topic for two reasons:

Don’t worry! There is hope! Even if you’re a stay-at-home spouse that doesn’t produce an income, you can still make positive changes.

I believe married couples will always do best to combine finances.

If your finances aren’t combined, you should really be asking yourself why you got married in the first place if you don’t trust this person with your money.

This is my personal opinion, and I understand that it’s not popular, but I highly recommend at least asking yourself why your finances aren’t combined. It may be eye opening when you come up with the answer.

If you want to better your finances and your spouse doesn’t, plead your case and explain why you should be the one in charge of the finances.

Let’s be real, as a stay-at-home spouse, you contribute just as much (if not more) to the family as your spouse. You need to have a say in the finances.

If you don’t produce an income, and you have a certain amount of spending money each money, spend it wisely.

Consider saving it for a period of time to show him what you’re capable of, and how money grows over time.

If he isn’t listening to you now, maybe a wake-up call is in order. Saving an abnormally large amount of money, or showing how far you made the money go, are both great ways to show why you should be the one handling the money.

If you’re a stay-at-home spouse who wants financial change, and your partner doesn’t, your primary goal should be to manage the household finances.

Explain why it makes more sense for you to do it. Tell him you want to improve your finances. Show him your plan. Tell him you’ve set aside a certain amount of time each day to manage the family’s money.

If your spouse is really busy at work, it probably makes the most sense for you to handle the money. You’re probably better at managing your time, since you’re used to having to manage it yourself.

What Not to Do

These are things you need to avoid during this process of trying to convince your spouse to make financial change:

Be smart about it. You probably shouldn’t reference this article when you talk to them.

A Final Message to Husbands and Wives

Remember to keep loving your spouse as they are, until they’re willing to change.

It will take patience and time, but you can get on the same page. It will happen if you can wait it out and do your part.

For the most part (statistically), for women, money is security. Women often like having a large emergency fund, because it shows her that she will be take care of.

For the most part (statistically), for men, money is either a tool or a game. More mature men see money as a tool to get the things they want and make things happen. Less mature men think money only exists for the purpose of fun.

This is based on the majority of how men and women feel. Obviously it doesn’t apply to everyone, but it applies to most, that’s why it’s the “majority.”

Husbands, it’s important to remember that money is security for your wife. Consider letting her control the finances, especially if she is the saver.

Wives, remember that your husband may be afraid to lose control of the finances, especially if he is the primary breadwinner. Take it one step at a time.

Lastly, I will say this. One person should never have 100% control over the finances. It makes sense for one person to “handle” the finances, or be in charge of them, but the other person should always know exactly where you’re at financially. You never want to be blindsided by something merely because you don’t have any visibility over the money at all.

Have you dealt with this before? What are some ways you have been able to overcome this? Share any ideas in the comments!