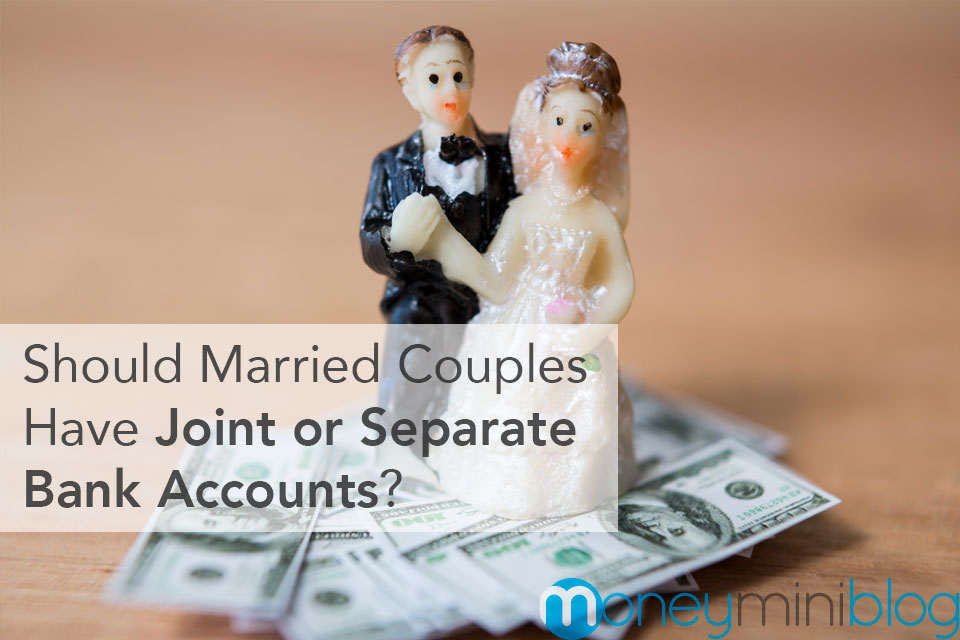 Mostly because it’s such a matter of preference.

In preparation to write this, I read a lot of articles about the topic, and I’ve noticed a couple things:

I recognize the fact that it’s going to be different for everyone, but I do have some things to say on this topic. Remember that this is just my opinion, even if it sounds like I am being overly forward. And of course, share your views in the comments.

What are the Options?

Let’s discuss the benefits and drawbacks of each.

Full disclosure: This is how my wife and I roll.

We believe marriage is for life, divorce is not an option, and everything we own belongs to both of us. Since that’s our stance, it makes sense that our finances are 100% combined.

While my wife brings more financial value to the family, I’m the only one who has an income. That means the only other option for us would be to have joint and separate accounts, because she relies on my income to pay the bills. If we were to go with that option, I would have to give her an allowance to spend every paycheck, and that seems ridiculous to me seeing as how she is an adult (much more so than I am).

If you’re worried about the possibility of a divorce, I understand being hesitant about the “fully joint” option. But I feel like you should be reading a marriage article if you’re that concerned with “what happens if we get a divorce?”

If you’re afraid to combine your finances completely, you may want to consider why you got married in the first place. I mean that literally. I’m not saying you shouldn’t be married, but seriously consider the foundation of your marriage to see if there are some things you need to work on outside of the financial realm.

Marriage is all about trust, and money is a great way to test that trust.

Now we’re talking about split finances. You live like roommates, and I don’t mean that in a negative way; it’s an accurate analogy.

This option only works when both people produce an income, since you’re each paying your portion of the bills.

I’ve seen this happen often when one person makes a lot more than the other, and they don’t feel like combing finances is fair. That seems pretty childish to me, but you be the judge. Marriage isn’t a competition.

I also think marriage is a great accountability tool if you have a habit that needs monitoring, such as gambling or drinking too much. It’s easy to hide things like this with separate finances. If you’re spending your money irresponsibly, no one has to know when the finances are separate. If that’s you, consider getting the accountability of combined finances.

One of the most common options.

If you want to pay your major bills out of one account, and then have the privacy of your personal spending, consider having joint and separate accounts.

This seems to work well. Especially if one of you doesn’t like the idea of getting agreement (some may call this asking permission) before making purchases. And this way, you can save your own money if your spouse tends to be more of the spender.

If you want to spend your own money, free off any judgement, then by all means get separate accounts for monthly spending. But this is assuming you’re budgeting a certain amount for each of you to spend.

The most important thing is that you’re on the same page financially.

If you want separate accounts (fully or partially), you still need to create financial goals together. I’m of the belief that your money will go farther and you can do more with combined finances, but that’s up to you and your spouse.

If your finances are completely separated, you should still come together to figure out short-term and long-term goals.

You’re married, therefore you are a team. It doesn’t make sense to me to have two different emergency funds, and separate retirement accounts. If one of you has an emergency, it’s the responsibility of both of you to handle it. Likewise, wouldn’t it be terrible to get to retirement and find out that only one of you is financially secure enough to retire? I couldn’t imagine not being on the same page with retirement.

Get on the same page, and the rest will follow. But doing finances completely separately with no communication is a recipe for disaster.

What Makes the Most Sense for You?

It’s your decision, hopefully made with the agreement of your spouse.

For us, it’s easier to combine, and we’ve never thought of doing it differently.

If you have insecurities or bad memories from a past marriage that cause you to separate your finances, consider the real reasons you’re doing it. This may be a good lesson in trust for you to combine finances.

Finally, don’t forget that at the end of the day, it’s just money. Your marriage is more important than money. I think the most important underlying factor here has to do with the amount of trust in your marriage. Don’t worry so much about whether or not to separate your accounts. First, work on your marriage, and see what makes the most sense from a marital standpoint.

This topic is better for a discussion than for an article, so let’s hear how you feel about it in the comments! And for further reading, Penny from CNBC has some great advice for couples who can’t decide which option to go with.