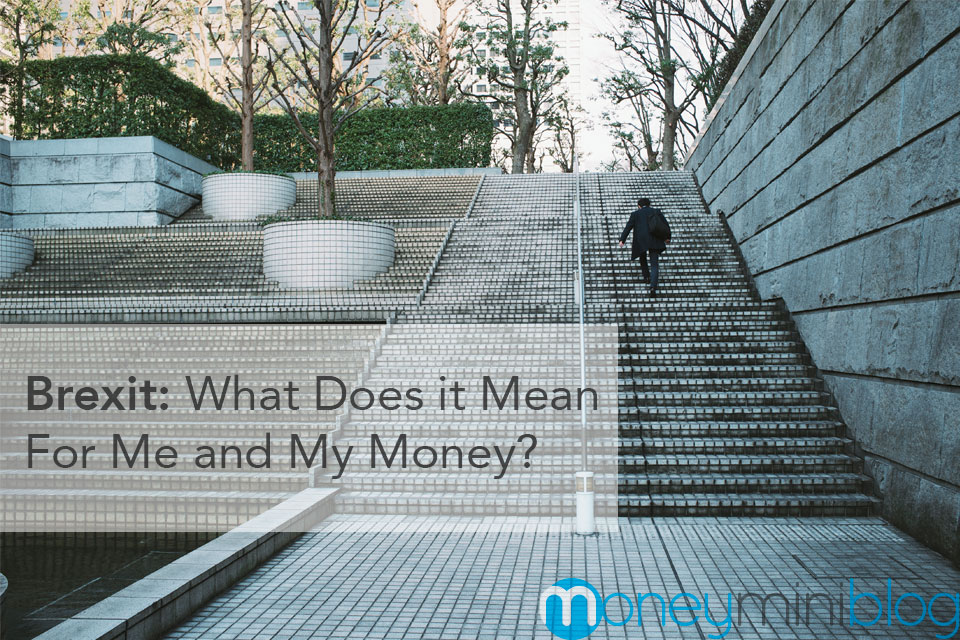 Great info for our UK readers…

While the reaction in the markets to the Brexit vote has been mixed with the pound falling but business confidence apparently holding up well, what is less clear is what effect leaving the European Union will have on the average Briton. European rules, customs and regulations are deeply ingrained in British economic life. So it is hard to forecast what the impact will be – two years after Article 50 is invoked and the UK exits – on our personal finances.

Here we look at what Brexit might mean for you and your money in four key areas:

Alongside immigration and employment, many experts say that the effect on household finances presents the biggest concern about Brexit. Some forecasters believe that household bills will rise sharply with the weakness of the pound already affecting the price of fuel. Because oil is traded in dollars, prices for both petrol and diesel have started to rise. Wholesale gas and electricity prices also track the price of oil and so are likely to rise so long as the pound remains weak against the dollar. Anything imported will become more expensive in sterling terms so expect the rate inflation to rise.

Early indications are that the Brexit vote has yet to have an effect on British house sales. Many indicators were already showing that the UK housing market was cooling significantly prior to the referendum on June 23 so it is difficult to determine whether there has been any further downward pressure as a result of Brexit.

In the immediate aftermath of the vote, the National Association of Estate Agents predicted that the average house price could fall by £2,300 by 2018 with larger falls in London and the South East. But the first quarter of 2016 saw a 40% drop in the number of buyers actively searching for a new home so it’s too early to say whether these predictions of a further decline will be borne out.

In the rental market, many experts say that restrictions on immigration from EU countries could see a marked drop in demand and corresponding fall in prices asked by landlords.

In September, the Bank of England cut the base rate to 0.25% and several lenders cut the interest rates charged on tracker, discount and variable rate mortgages. But this was a short-term move designed to shore up the credit markets and rates will eventually have to rise if, as has happened in the past, the Bank of England steps in and raises the base rate to protect the value of sterling and choke off inflation (see above).

This is a big unknown. The level of employment is at historic highs, but the future depends on the stance the Government takes on the terms of Brexit (e.g. in or out of the single market), how well it negotiates any other trade deals and what guarantees it provides to existing EU residents working in the UK.

The immediate news was bad for savers who were already having to endure non-existent returns on most of their investments. The cut in the bank rate to 0.25% means that there is now effectively a 0% return on a raft of savings products with some banks now charging businesses to hold funds on deposit.

Should the negotiations over the terms of Britain’s departure not work in the UK’s favour, there could be declines in the stock market as business confidence takes a hit. This would pile further misery on savers and particularly those close to retirement who are relying upon growth of their pension funds to pay for a comfortable old age.

Travelling abroad is already significantly more expensive for British holidaymakers following the vote. Sterling has declined by as much as 15% against foreign currencies making holidays overseas correspondingly more expensive.

Holidays to Europe may become more expensive in the longer term as well. Should the UK be forced into a so-called “hard Brexit” and leave almost all European conventions and agreements, then Britons may lose the European Health Insurance Card. This gives holidaymakers the benefit of state medical services across the union and its loss would mean that the cost of travel insurance would rise.

Furthermore, it is unclear what will happen to mobile phone roaming charges. These are to be abolished across the EU from next year but if the UK leaves the EU, the country’s networks would technically be able to reintroduce them, potentially adding hundreds of pounds to the cost of using a mobile abroad.

And in the air, if the UK leaves the existing Open Skies agreement then our airlines might not be free to use continental airports with few restrictions and so have to impose further charges on travellers.

About the Author:
Dakota Murphey, BA (hons) Marketing graduate and independent content writer – working with Solution Loans for parts of the information in this post.