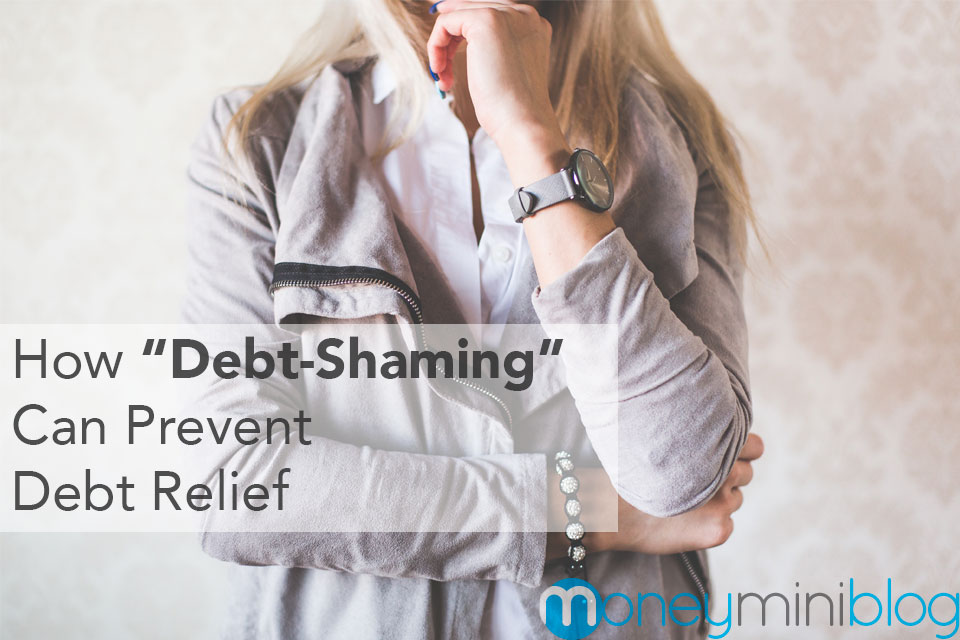 Today I have an awesome guest post from Jeriann Watkins about debt shaming.  This is a topic that I have yet to cover, and she gives an interesting perspective.  Check it out!

Americans are in a lot of debt. Between credit card debt, the rise of student loans, and the ever-in-flux real estate market, it’s harder and harder for people to live without some form of debt. Exact figures are hard to come by, as credit card debt, also known as “revolving” debt and consumer debt, is measured separately from debt like student loans and mortgages. That makes sense, as they are very different, but that separation often disappears when financial advice is given.

If you do a search for “getting out of debt”, you’ll find a lot of great inspiration from people who had seemingly insurmountable debt and dug themselves out. You’ll also find a lot of generic “100 ways to save $100 a month” articles with generic advice like “spend less on food”, “cut your landline” and “stop using credit cards”.

Advice like that isn’t wrong (except for the fact that most people who still have a landline probably have a good reason and aren’t giving it up at this point), but it’s not very useful for people whose only debt is from student loans and/or a mortgage. Debt of any kind is draining, and I suggest that anyone in any sort of debt does everything they can to minimize interest and pay it off quickly, but there are some legitimate reasons that debt-shaming is counterproductive when talking about student loans and mortgage debt.

First, let’s define debt-shaming. This is the practice of pointing out that the person who is in debt is there because of bad habits and decisions they’ve made. This is actually a great tactic to use when it comes to consumer debt, as it does force people to look at their actions and claim responsibility for their situation.

However, despite the fact that student loans and mortgages are taken on voluntarily, the advice given to those in consumer debt isn’t as helpful. Sure, cutting costs is always a good idea. But if you have $60,000 in student loans and the only advice you see is to skimp on groceries and stop being lazy, you’re not going to be motivated to find a way out of debt. In fact, you might decide nothing matters and just make the minimum payments because it’d be impossible to put a dent in your sizable loans.

Many students aren’t financially knowledgeable by the time they acquire student loans. They might be told they should get an early start on interest payments, but they likely have no real knowledge of how many thousands of dollars that will save them. By the time they are ready to pay off their loans and get out from under the debt, they realize their mistakes. It’s not helpful to rehash them. Many were undereducated by their parents and the school system. Some were misled about job availability in their field or how much they could make once they had a degree.

Homeowners can experience the same feeling. Often, a mortgage is spun as “good debt”. It is an investment in your future, the American dream. But monthly mortgage payments can be emotionally and financially overwhelming, especially since most of the early payments go straight to interest. If medical expenses accumulate or you lose your job and can no longer make payments, feelings of shame can surface and lead to depression and feelings of worthlessness.

Those who dispense financial advice should think about a few things before publishing:

People in non-consumer debt should keep the following in mind:

The best way to pay off debt is to build momentum and be determined. Paying off debt has to be the main priority, taking precedence over things that cost money and diminish your progress. Being given generic advice and told that you’re stupid for being in debt in the first place isn’t helpful. Admit your role in your debt, but don’t give in to shame. And if you’re ever in a position to give financial advice, remember, think actionable: Taking responsibility is productive; debt shaming isn’t.

About the Author:
Jeriann Watkins graduated with a Liberal Arts Degree from a private out-of-state school. She then moved back to Idaho, one of the lowest paying states in the U.S. Despite this, she is making a sizable dent in her student loans and is determined to pay them off before she’s 30. Check out her blog, dairyairhead.com to see her financial journey, examples of her freelance writing, and other things she is doing to increase her income.