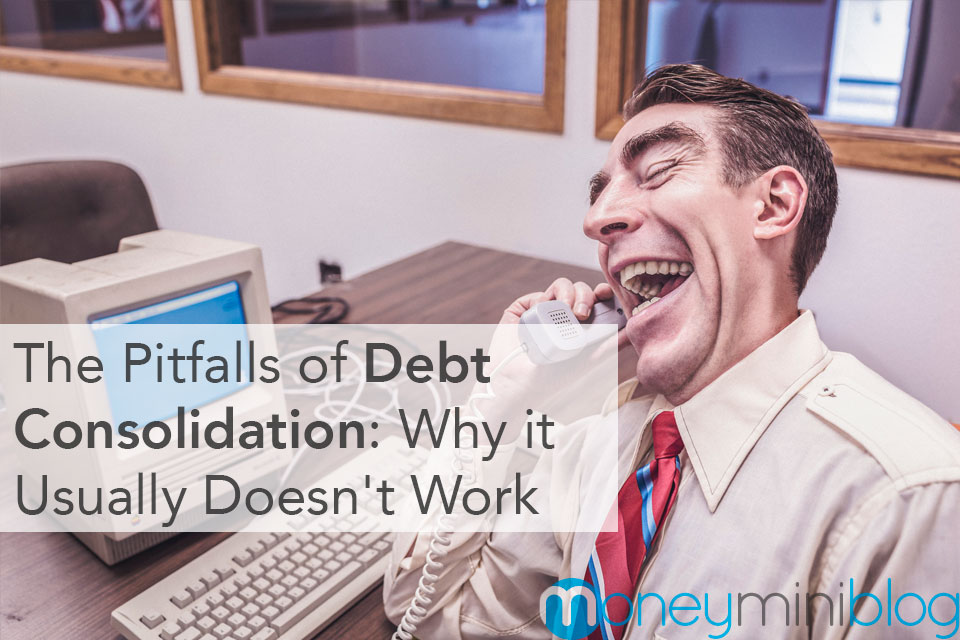 Want to know a secret about debt consolidation loans? They usually don’t work.

There’s a lot of money to be made by promoting and arranging these loans, as well as the enormous hope that surrounds them, so you won’t hear too much about how they don’t work. Having worked in the mortgage business for many years, and seeing the process play out again and again, I can say on good authority that it usually doesn’t work.

Great idea in theory, but the reality looks radically different.

Nearly any kind of loan can work for debt consolidation cash-out first mortgages, second mortgages, home equity lines of credit (HELOCs), unsecured loans, and even credit cards. But the problems usually aren’t the loans themselves; it’s the human factor.

An Example Debt Consolidation That Fails

To give an example, the typical debt consolidation profile looks something like this:

The borrower finds he can do a new first mortgage and consolidate all of his debts into one monthly payment of just $1,300 per month on a $175,000 loan. Wow, that was easy, wasn’t it?

But the story isn’t finished.

Two years later our borrower still has his new mortgage with all of his old debts rolled into it but he also has:

Do you see the pattern? I saw it all the time anyone who works in the lending industry sees it all the time! A bullet was dodged with the consolidation and life went back to normal. If house prices were still rising the way they were a few years ago, he’d probably do another consolidation to make the new load of debts go away.

We expect consolidations to make our debt go away, and to do so painlessly. If it were possible then no one would have debt problems. The truth is if you’re not feeling some pain during the consolidation you’re probably headed in the wrong direction!

There are a few factors sabotaging most debt consolidations, and they usually include one or more of the following:

Have you tried a debt consolidation? How did it work for you?

About the Author:
Steven is a professional personal finance journalist. He is a contributor for several personal finance web sites. His work has been mentioned in and linked to from, USA Today, The Huffington Post, Benzinga, Investopedia, The Wall Street Journal, and other publications. Make sure to subscribe to his Credit Zeal blog.