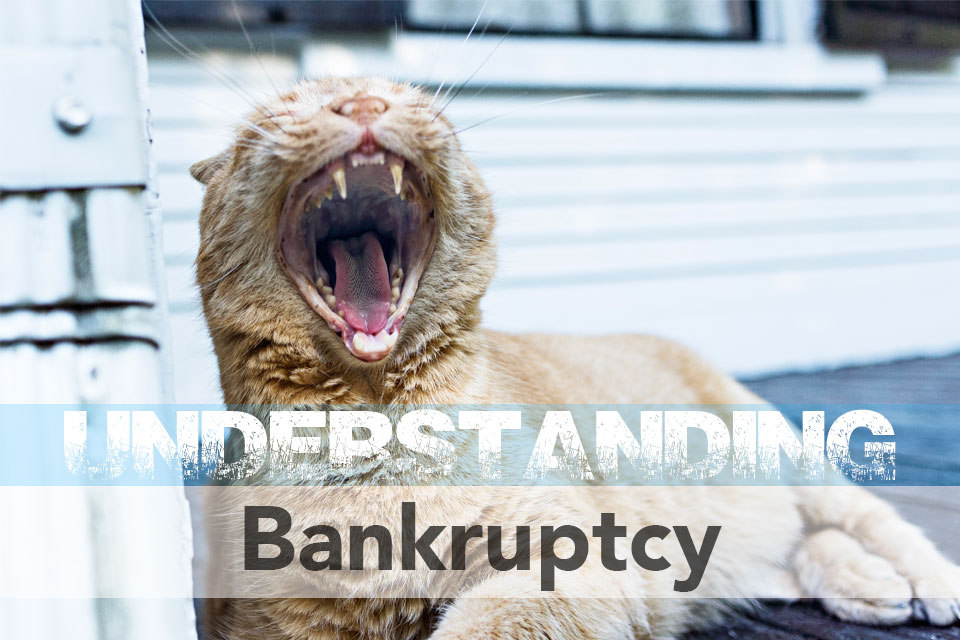 A problem that can be avoided, but if you’re past the avoiding stage, it may be your best option.

Let’s dive in and discuss the different types of bankruptcy, when to file, when not to file, and the effects of filing.

The actual definition is “the state of being bankrupt.”  Well that explains everything.

Bankruptcy is when you can’t pay your debt (personal or business) and you have to find a way to get rid of it.  It’s a fresh start, kind of.  But as you know, there are negative effects and consequences.

Generally the process involves paying your outstanding debt with your assets, but not always.  It depends on the type.

Here are the primary forms of bankruptcy you may need to know about:

There are a couple other types of bankruptcy.  They include Chapter 9, which is for cities and towns to reorganize their debt, and Chapter 15, which is applies to people who have debt within the US and outside the borders.  I’m not going to go into detail about these, because you most likely don’t need them!  Unless you own a city or something.  Do you own a city?

When to File Bankruptcy (And When Not To)

Bankruptcy can be devastating to your financial situation on paper, but it can also provide relief.  Sure, it can hurt your chances of getting another loan in the future, but if you’re facing bankruptcy, the last thing you should be worried about is another loan.

Simply put, bankruptcy is for people who owe more than they can afford.

If your bills are behind, creditors are calling, you’re barely making minimum payments and you don’t see another way out, bankruptcy could be an option for you.  It is a solution to a completely overwhelming financial situation.  It would be better to file for bankruptcy than to sacrifice your health over the stress of a financial meltdown.

Especially after the housing bubble popped, people have been walking away from homes that they could afford, because they owned way more than the home was worth.  If you can afford to make the payment, and you purposely don’t, that’s strategic default.  There’s nothing responsible or commendable about strategic default.  Any self-respecting adult should see that.  So don’t do that.

File for bankruptcy when you see no other way out of the situation.  If you’re just in a lot of debt, but you’re able to pay it, read our Get Out of Debt Guide or go talk to a professional.  Consolidate your debt if you have to.  But bankruptcy is only for an otherwise unsolvable situation.  You don’t want to file for bankruptcy on a whim, and I’ll explain why below.

What to Do Before Filing for Bankruptcy

So you’ve decided that bankruptcy may be for you.  You don’t see another way out.

The process for filing isn’t always fast, but it is relatively easy.  However, before you file for bankruptcy, you should do a few things:

You have to be prepared when you file for bankruptcy.  The last thing you want is to file without realizing your home is going to be taken away.  Then you’re bankrupt and practically left on the street.  I’ve personally known people who lost everything and were literally living on the street with their family.  Full disclosure: this happened before I met them; otherwise, they would have been welcomed at my house.

The Negative Effects of Bankruptcy

In the scope of life, a decade isn’t as long as it sounds, but you will have to expect your life to be different until you’ve fully recovered from the bankruptcy.  It’s good that you can’t file for bankruptcy and then immediately go out and get back into the same amount of debt, and that’s why it has that effect on your credit report.

Popular now
What Causes the Price of a Stock to Rise or Fall?

That being said, when you file for bankruptcy, it’s likely that you will start seeing credit card offers immediately.  Why? Because they know you filed for bankruptcy and they know you can’t file again for a long time; therefore, they send the offers.  Obviously this is a trap.  Your interest rates are going to be astronomical, and they will promote the credit offers as a way to bring your credit score back up.  Don’t fall for it.

Once you file, you should wait a long time before even considering more credit cards.  Credit cards are great if you use them responsibly, but there’s a good chance that using them irresponsibility is what got you into bankruptcy in the first place.  In that case, I highly suggest using cash for at least the seven to ten years your credit is hurting.  Then, and only then, can you possibly make the decision to start using credit cards again, but you have to be honest with yourself about your level of responsibility.  You don’t want to file for bankruptcy twice, do you?

There are some other areas that are affected by bankruptcy, but they aren’t often talked about.  For example, if you want to join the military, a bankruptcy could hold you back.  It’s not impossible, but it will require a waiver, and waivers don’t always get approved.

Your best bet is to avoid bankruptcy unless the benefits outweigh the consequences.

Do you or someone you know have experience with bankruptcy? Share your stories.