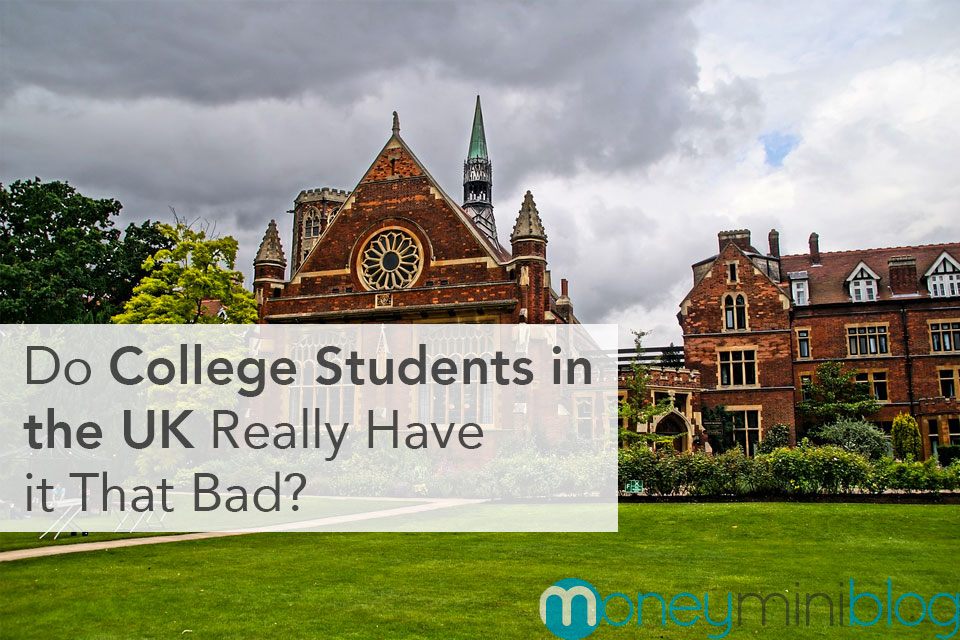 Note from Kalen: With all of the articles I have on college for Americans, I want to post an article today that is directed toward UK students. A large portion of my audience are in the UK, so this is for you guys!

Just how bad is the financial plight of the average university student in the UK? As is the case with most questions, the answer to this one depends upon whom you ask. Some say uni students are fighting a losing battle because tuition is rising and maintenance loans are inadequate, particularly in London and other notoriously expensive areas. Others say that many students are squandering their money partying and buying items they don’t need. Who’s right?

A poll of nearly 2,000 uni students taken in mid-2015 by the student money website and advocacy organisation Save the Student revealed some rather disturbing answers to the question about uni students’ finances. First off the majority of the students said that uni isn’t worth the money and they fear they won’t find work upon graduating. Moreover most of them seem to be inadequately funded. On average, students polled received £480-per-month in maintenance loans. But they spend £745, leaving them £265 short with their biggest outgoings being rent (£373 per month) and food (£110).

Even more unsettling, seven percent confessed to having sold their bodies or otherwise worked in the sex trade in order to make up for shortfalls. Others have turned to gambling, maxing out credit cards or taking out payday loans.

Owen Burek, the editor in chief of Save the Student, called for a reform of maintenance loans because, he said, students are confused. One in two students tell Save the Student that they don’t understand the loan repayment conditions, yet they are signing up for debts which aren’t fit for their purpose. Said Mr. Burek, “Maintenance loans don’t reflect real living costs, regional differences and parents’ ability to contribute. Frankly, they’re out-of-touch with individual circumstances and student needs.”

The other side of the coin

For many uni students, socialising is equally as important as, if not more important than, getting an education. But socialising can cost money, and a report released in early October 2015 by YouGov claimed that only 26 percent of students think they have enough money to enjoy themselves. At least that’s up from 2014, when only 16 percent of students said they had enough.

But it’s not just about entertainment; the report also said that 21 percent of students struggle to find the money for their day to day needs. Fully 35 per cent of students worked either during term-time or vacations and 26 per cent said they get their loans topped up by their parents.

In an opinion piece for The Tab, however, uni student Sebastian Johnson said the reality isn’t as grim as these numbers might lead one to believe. He wrote, “…to say that only a quarter of us enjoy ourselves is more than farfetched. There are definitely students that are genuinely hard done by, struggling to pay bills and with just enough money to pay for the bare necessities. But how many of us call mum asking for money to pay the bills, when really it’s to get legless on a Friday?”

Mr. Johnson cites a NUS survey indicating that the average university student in the UK goes out drinking twice a week and consumes an average of eight drinks a night. Add the cost of entry to clubs, post-drinking feasts and cab or rideshare fare… and it adds up. Mr. Johnson blames “the culture of the British university experience”.

Clearly this “experience” doesn’t apply to everyone but it is enough of a factor that the smart mum and dad will do a little questioning if Junior comes to them too often for extra money between loan instalments.

Do yourself a favour and rein in your spending

University life can be very stressful no matter what your financial situation is and even if you don’t squander all of your money on partying. Freshers in particular often struggle because they’re away from home for the first time and it’s all a bit bewildering to them. They have to make dozens of decisions on their own, where previously they had Mum and Dad hovering over them, making the decisions for them. Learning to handle money responsibly can be a formidable challenge; for instance when that first instalment of the maintenance loan comes in it may be tempting to look at it as “free money”. The reality is that this money has to last several months and once it’s gone, it’s gone. And it’s astounding how quickly it can be “gone” if you’re not careful.

That’s why the biggest favour you can do for yourself is to sit down and carefully plan what you’re going to do with those funds. Force yourself to make a budget; if you need help there are online resources as well as numerous smartphone apps to help make the task easier. Budgeting isn’t necessarily fun or exciting, but it beats running out of money and scrambling to find ways – some of them unsavoury – to see you through till the next instalment.