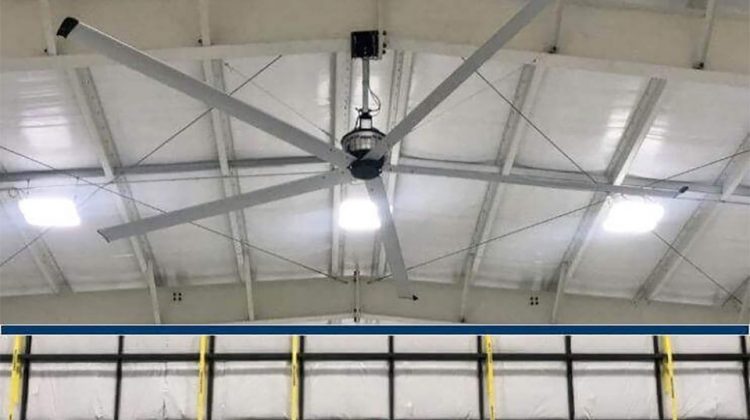 Industrial fans can certainly vary significantly. People often have to start by choosing an industrial ceiling fan of the right size.

An industrial fan with a diameter of fifty-six inches is actually relatively small, at least compared to many other industrial or commercial fans. The very biggest of these fans will typically have diameters that measure twenty-four feet.

When professionals purchase big industrial ceiling fans, they should always consider where the fan is going to be installed and the overall size of that space. Some industrial spaces are relatively large, but still under three hundred and fifty square feet. If they’re that size, the industrial fan should have a diameter that measures between fifty-two and fifty-five inches or so.

Rooms that are bigger than three hundred and fifty square feet will need a slightly larger industrial fan in many cases. However, they still probably won’t need notably large fans. An industrial fan that has a diameter of roughly fifty-nine or sixty inches will probably work effectively. If the room measures almost exactly three hundred and fifty square feet, an industrial fan with a diameter of fifty-seven or fifty-eight inches may work particularly well. Some organizations may also decide to use more than one fan.

Using just one large industrial fan can be fine in plenty of settings. However, it’s also common for professionals to get two industrial fans installed in these buildings. The entire room’s airflow might improve as a result.

Having three or four fans might also work in large industrial spaces. The different fans can’t be too close together, but if the distance between them is even enough, professionals will be able to use the fans particularly effectively.

A group of relatively small fans may ultimately use somewhat less energy than one much bigger fan, which can make a difference for plenty of businesses. Since these fans will interact well with each other and sustain excellent airflow patterns, people may be able to run the fans at a somewhat lower level. The individual industrial fans will use less electricity, and they’ll also collectively use much less energy than a bigger fan would.

Larger industrial fans will certainly need more energy than smaller fans. As the fans increase in size, the amount of electricity that they’ll need will become proportionately higher. Businesses and industries that want to be more sustainable often have to specifically look at the energy and resources that are used at the production stage.

Switching to a newer and smaller industrial fan can already save businesses money by gradually reducing their electricity expenses. Industries may not need the largest industrial fans, and some new industrial fans can cool buildings more efficiently at comparatively small sizes.