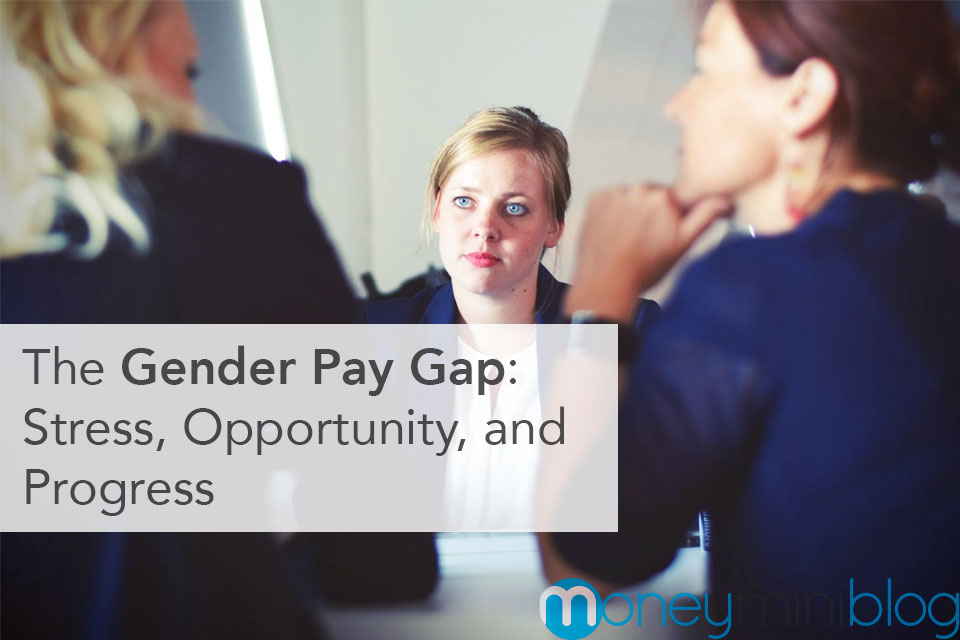 If two jobs are completed by similar people, you’d expect them to get the same pay. Unfortunately, this isn’t always the case. The gender pay gap is a hot topic, and for good reason: Many women are underpaid for work that’s identical to that done by a male counterpart.

This is a gross simplification of the gender pay gap, though. Let’s take a closer look before diving into why the pay gap exists, a study that shows how it impacts stress, and what you can do to combat it.

What Is the Gender Pay Gap?

In short, the gender pay gap is a disparity between pay when it comes to work done by men versus work done by women. When looking at the financial gap between genders, there are two foundational stats:

If you look at the controlled gap, things are looking pretty close to equal. Right? Well, yes and no. If you factor in the qualifications, experience, and so on, then yes, women are almost making as much as men. (Almost still isn’t good enough, however.)

Why Does the Gender Pay Gap Exist?

While women in high-paying or specialized jobs are coming close to making the same amount as men, equality still isn’t there. Even worse, the opportunity gap highlights the fact that women simply aren’t being given the same opportunities as men when it comes to high-paying, specialized roles.

Breaking down the “why” behind this issue is a difficult, nuanced task. That being said, there are a few areas that are often attributed with being a part of the problem:

There are countless reasons the gender pay gap exists, none of them justifiable. Still, understanding these reasons is the first step to combatting the pay gap, as they can make you better-prepared for discussions with your employer regarding pay.

How the Pay Gap Impacts Stress

A recent study from Novi Money examined how the pay gap has influenced financial stress, looking specifically at the different levels of stress between male and female millennials. Some of the standout findings are:

So, what does all of this mean exactly?

These stats on their own are shocking enough, but together they tell a powerful story: Women, particularly younger women, have developed a large amount of financial stress and doubt.

So, is there anything you can do to counter this stress and the wage gap?

The issue of the pay and opportunity gap is larger than any one person. Still, you can take strides to combat financial stress in your own life.

There are a number of things you can do to help fight financial stress and put yourself in a better financial situation as quickly as possible.

Even when money is tight, a proper budget can help you get the most out of your money. More importantly, a budget will help you live within your means and reduce the chance that you overspend and wind up in debt.

Debt can cause a load of stress, so avoiding it at all costs should be a top priority. What’s more, a budget can help you save up and put aside more money for emergencies and retirement, allowing you to close that retirement gap.

Create a budget as soon as possible to get yourself on the right path and combat some of that financial stress.

It might seem counterintuitive to budgeting, but make sure to treat yourself every now and then. This doesn’t have to mean buying everything on your Amazon wish list, but simply taking time out of your day to do something you enjoy, treating yourself to a meal you want every now and then, and so on.

3. Pick Up a Side Hustle

We’re fortunate enough to live in an age where you can do a million different things from home and make money. Whether you want to look into freelance writing, learn some marketing basics and get into digital marketing, or something totally out of left field, you can find the right opportunity online.

Your options are even wider if you’re interested in a little adventure, like driving for a rideshare company, delivering food, or even opening a dropshipping business.

Passive income generally starts off slow, but over time it can become a great boon to your finances. In some cases you can secure enough passive income from one or more sources that you don’t even have to work full-time anymore.

Read up on passive income jobs and see if you find any that sound appealing. You generally have little to lose by trying them out, so be bold.

A huge part of the battle when it comes to anything in the finance world is education. Never stop reading up on the latest in budgeting, side hustles, financial tips, and so on.

This information will help you make better choices with your own money, better equip you for discussions with your boss surrounding promotions or raises, and help you blaze a better financial path to wellness.

Discouragement, anger, and stress are all understandable when thinking about the financial gap. But, your financial future is still yours, even though the cards may be stacked against you.

Equip yourself with the right information, take a deep breath, do something you enjoy, and find something you love doing and monetize it. There are more side hustles and sources of passive income available than any single person could ever hope to do, so the odds of you finding the right one are certainly there.

The financial gap will continue to be frustrating as long as it exists, but that doesn’t mean you can’t lead by example and build a bright financial future you’re proud of.

About the Author:
R.J. Weiss is the founder and editor of The Ways To Wealth, a Certified Financial Planner™️, husband and father of three. He’s spent the last 10+ years writing about personal finance and has been featured in Forbes, Bloomberg, MSN Money, and other publications.