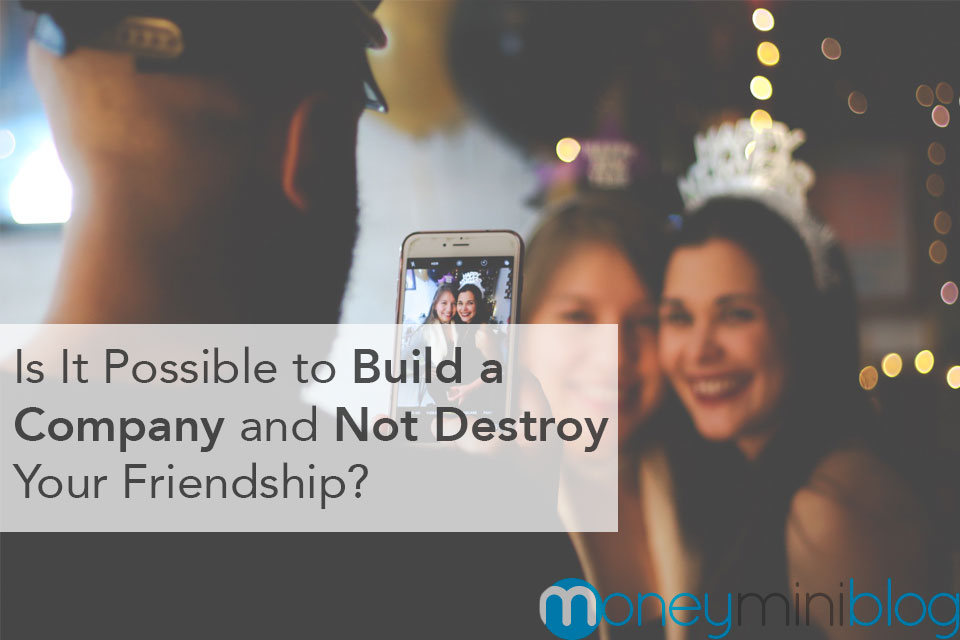 Who wouldn’t want to start a company with their friend if they can be sure that they won’t lose their friendship as a result?

The problem is, that’s not entirely sure.

Friendships and partnerships are not the same things and the latter can seriously damage the former.

The question is, does it have to be that way? Can you have a partnership and a friendship at the same time?

The short answer is ‘yes, but’. As in, yes, but are you sure you want to risk it?’ and ‘yes, but it’s not very likely to succeed, with studies showing that friendship partnerships being the most unstable. The long answer is the rest of this article.

You need a strong foundation

A big mistake people make when they start a business with a friend is not being businesslike about it. They don’t spell out the exact responsibilities, for example. Often they’ll skip such things as drawing up a contract and getting legal advice as well.

They assume that because they’re friends they don’t need to, but that gets it exactly backward. Because you’re friends, you particularly need to.

It doesn’t end there, either. Just because you’re friends doesn’t mean that you’ve got the same vision for the company – or about life, for that matter. Therefore, you need to make sure that you’ve drawn up a clear business plan that spells out how you’re going to be working together. Also, draw up a set of scenarios and work through them together to see if you can see eye-to-eye on the idea that you’re formulating. Do you want to sell and if so, when? How aggressive do you want to be? How much risk do you want to take on? And so forth.

What is your friendship based on?

The first thing that you need to analyze is why you’re actually friends. There are many reasons why people are friends and the reasons for friendship is often far more complicated than we believe. For that reason, when your friend comes to you to start a business venture, take the time to actually figure out what your friendship is based on.

Is it a friendship that comes forth from mutual respect, or is a friendship that’s actually based on being silly together? Have you worked together before and have you seen each other’s work, or is it more that you’ve just heard about each other’s accomplishments second-hand? When you hang out, what do you talk about? You might think you’ve got a friendship based on deep conversations, but is that actually true? You might just think that’s what you do when in truth you just talk about people you’ve slept with.

Is the friendship one where both of you are better off as a result of the other person’s friendship, or is it more a case of the sunk cost fallacy?

You have to match your work habits

A great way to build resentment between two people is if one of you feels that they’re doing far more work than the other person. And when that happens, you’ll quickly see the strain affect other parts of your life. For that reason, if one of you works much harder than the other person, that probably means that you shouldn’t work together – as sooner or later that will be a problem.

That isn’t the only thing that you need to keep in mind. If one of you is very meticulous and the other person operates by the seat of their pants, that can very quickly become incredibly annoying as the two of you continually clash heads.

The best thing you can do is work together on some projects first to see if you’re going to be able to do this for the long term. And when you do work together in that way, pay attention to even minor annoyances that you might have with each other. For when you run into those minor annoyances, again and again, they turn into major frustrations pretty quickly. And from there one of you is going to need a new cv and resume pretty quickly.

You need to establish who is the boss

Or if there isn’t one, how you’re going to resolve problems when they crop up. Be aware that though initially one of you might be okay with being the second in command that can change pretty quickly once you’re working together. You might think you can deal with that, but often it’s far harder to actually do when the manure hits the quickly rotating thingy.

The great thing about partnerships that aren’t based on friendships is that at the end of the day, you can both walk away and go complaint to your respective friends with only a little bit of risk as to the other person finding out what you said.

That isn’t the case when you’re working with a friend. Then, if you complain about your partner to your group of friends, there is always a chance that it will get back to them. And you can be sure that whatever you say after a couple of beers and a particularly bad day is not something that your partner and friend really want to hear about.

For that reason, it’s vitally important that you find some way to not bitch to common friends about what is going on – or, for that matter, friends that you don’t have in common with the overlap of the groups means that might well change rapidly. And this kind of gossip is way worse than office gossip.

The challenge, of course, is that when you’re hanging out with friends that you have in common, the desire to tell them about what’s going wrong is going to be all the greater, as the third party actually knows both of you.

How are your personal lives?

Then there are the persona lives of both parties. You might be the perfect match for each other on every other level, but if one of your personal lives suddenly blows up or continuously gets dragged down by some kind of extraneous factor (their spouse and them keep getting into trouble), or they have a habit that gets them into trouble, that can still make it a terrible idea for you to enter into a business with that person.

Similarly, how healthy are they? Yeah sure, some people eat well, do lots of sports and still keel over at the age of 30. Still, if you’re partnering up with somebody who smokes two packs a day and drinks a bottle of rum a night, that will probably have consequences somewhere down the road.

The worst part is because they’re your friend that means you’re not just going to have to run the business on your own, you’re also going to feel responsible for taking care of them. That will eat into your time in multiple ways.

Do your skillset complement each other

Then there are skillsets. If you want to work together well, you’re going to have to make sure there isn’t too much overlap. Otherwise, you’ll have too much expertise in one direction and not enough in other directions. That can cause real problems, as you might well find that you end up arguing about what both of you know how to do well while needing to bring in additional people to cover those areas neither of you has mastered.

What’s more, when you have complimentary skillsets, you’ll find it much easier and far more natural to separate the work between you along the lines of your skillsets. If they’re good at programming, while you’re good at people management, well then that will be a natural division of labor.

That’s going to be a lot harder when your skills are very much the same.

So yeah, there are a lot of problems that you’ll need to confront if you want to work with your best friend. It’s true, in many ways they’re the same problems as you would face when working with somebody who isn’t your friend. The thing is, they’re significantly amplified when you are working with somebody who is both a friend and a partner. What’s worse, if it goes wrong you haven’t just lost your business, but possibly also your friendship.

Is that worth it?

So yes, you can start a business with your friend. But there are a lot of dangers to it. So think carefully about who you team up with and make sure that they’re the right fit for you. If you can do that, then you can join the likes of Microsoft, Apple, and Google at the heights of the business world. If you do not, then there is a really good chance that you’ll end up with a failed business and a broken friendship. And then you’ll have to ask yourself ‘was it worth it’?

About the Author:
Nelma Lumme is originally from Finland. After her graduation from the School of Humanities and Social Sciences at the University of Tampere, she moved to Chicago, IL where she is starting a new career as a freelance blogger and writer for Flashessay.com. She writes mostly about education, self-improvement, and relationships. “How to deal with money is a kind of relationships as well” – Nelma says. If you want to hear more stories from her follow @NelmaLumme on Twitter or Facebook.