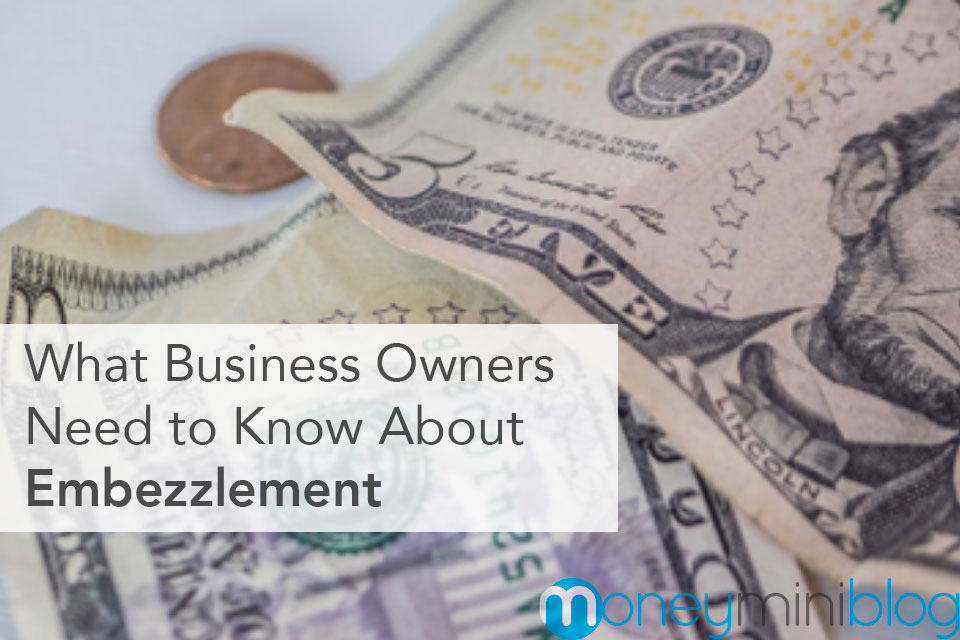 What is embezzlement exactly and how do you know if it’s happening in your company?

The definition of embezzlement is the stealing of company assets by a person entrusted with said assets. An example of embezzlement on a smaller scale is if the treasurer of the marching band swiped 20 bucks out of the fund for new uniforms. Larger scale embezzlement would involve hundreds of thousands of dollars stolen over many years from a major corporation.

While embezzlement cases on Wall Street are certainly a scandal, such heists are much harder to pull off. The Association of Certified Fraud Examiners found in 2019 that it was smaller-scale companies with less than 100 employees that had more reason to worry about potential embezzlement. The association cited that 28% of such companies faced such cases, with some losing as much as $200,000.

Embezzlement is actually a very common issue that small businesses face. It may often be on a smaller scale, but all the lost money and business add up in the long run. In such uncertain economic times, a loss like this can threaten your business’s ability to stay afloat.

There are a number of things an employee can do that falls under the description of embezzlement. The most common one is called siphoning. Siphoning is usually when an employee working a cash register figures out how to pocket some of the cash they are handling. This is done by sleight of hand and quick calculations, often shortchanging customers or recording money transfers inaccurately.

Other ways an employee can siphon cash would include actions like stealing from a petty cash container. Some employees have even been caught in scams of refunding stolen merchandise for cash. Often these types of crimes are committed by people who are acting out of desperation and do not require pressing charges. But cases of embezzlement can easily get serious enough to lead to jail time for perpetrators.

Despite a decrease in crime, The Sentencing Project notes that there has been a 500% increase in inmate populations over that last 40 years. If someone in your company embezzles money, there is a possibility they’ll go to jail for it and join these increasing inmate populations. This usually depends on what kind of embezzlement it was and how much was stolen.

Lapping, for example, is when an employee is messing with bank accounts and check or digital payment methods for a company. This can often be a more serious crime if it involves stealing people’s personal information. The employee will alter numbers and allocation destinations on payslips and digital wires to put money into their own account rather than the company’s.

Lower tier managers may commit embezzlement by adding friends, family, or spouses to payroll without them even working at your company. There are also cases where employees make deals with private vendors to overcharge for materials necessary for the company and split the excess cost. In the world of embezzlement, there are as many crimes as there are crooks to commit them.

The best way to watch out for embezzlement is to keep a close eye on the books. Making sure to look over the numbers in ledgers, even from your most trusted employee, will be prudent. Anomalies are always possible but should always be investigated. Its possible someone just made a miscalculation but it could also be a very deliberate and consistent miscalculation. Make sure to go back and check the logs as far back as they go to see if there is a pattern of miscalculations.

Figuring out who is responsible could be as simple as following the money. It’s important to not let personal biases determine how you proceed. While women make up only 23.7% of Congress, there is full and equal representation of the sexes in embezzlement, with stats showing 51% of embezzlement crimes are committed by women. Don’t overlook signs of embezzlement just because you don’t think the employee in question could be the culprit.

Be sure to track any shortages and record concrete proof. Your next steps will involve contacting a lawyer. It’s important to keep check of your emotions while this is happening. You will not want to tip the employee off that you’re aware they’ve embezzled from the company until a lawyer is confident they have a rock-solid case against the person.

Unfortunately embezzlement is an all-too-common crime in this day and age. It’s important for employers to be vigilant about their own finances and accounting to prevent embezzlement from destroying their business.