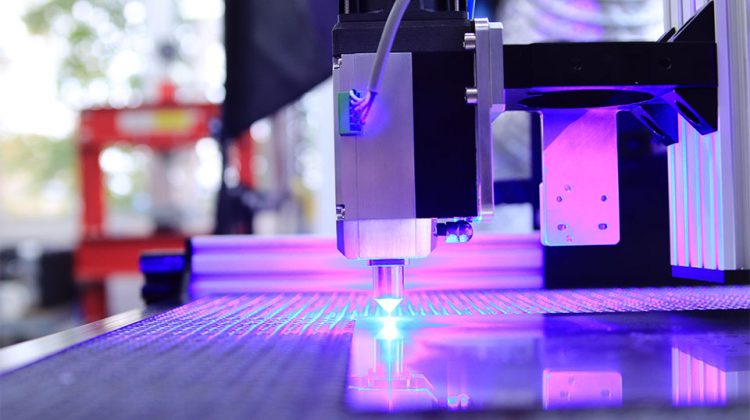 Rapid prototyping is a process of creating prototypes quickly by using 3D computer-aided design (CAD) to visually and functionally evaluate an engineering product design. The construction of the part or assembly is done using 3D printing technology. CAD and manufacturing tools allow new products to be designed, tested, built quickly, and repaired if needed.

There are several processes used in modern rapid prototyping and we’ll be breaking down some of the most common. We’ll also mention the 5 key factors that can have a major impact on the prototyping success including purpose, quality, quantity, complexity, and budget.

This process is fast and affordable, and it was the first successful method of commercial 3D printing. SLA uses a computer-controlled UV light laser that traces each 2D slice of a part on the build platform, thus curing a liquid photopolymer resin. Each layer that has been completed adheres to the next, so the process is repeated until a full part is formed.

SLS uses a computer-controlled laser to sinter multiple layers of powdered material. It is also compatible with elastomeric TPU powders that are similar to thermoplastics. It’s a particularly well-suited process for creating automobile hardware parts, however, the strength of the parts is not as good as with SLA.

The FDM method is inexpensive, easy to use, and it can be found in most non-industrial desktop 3D printers. It has been around for many years now and is one of the most common prototyping technologies not only because it’s easy and safe to use, but also can produce relatively strong parts at moderate to a low price point.

This process is similar to SLS where a laser is used to draw out a layered pattern onto the atomized metal powder. DMLS can be used with most alloys and metals and is one of the few additive manufacturing technologies that is used to create functional testing prototypes constructed from the same material as the final product.

SLM is similar to DMLS, but instead of sintering the powdered material, it uses an electron beam or high-power laser to melt the layers into the powder. This makes the process faster since it’s done at higher temperatures. SLM is frequently used by the automotive, aerospace, defense, and medical industries. Some of the common SLM materials used in rapid prototyping include aluminum, titanium, stainless steel, and cobalt chrome alloys.

During this process, a print head sprays a layer of photopolymer resin onto a gel matrix, proceeding to cure the resin under UV light. Ultra-thin and smooth layers of material are produced that can give the prototype a superior surface finish. It can be printed in multiple colors, and the process is moderately cost-effective.

What to Consider When Choosing a Rapid Prototyping Method

The number of prototype parts is very important in deciding the process as some prototyping technologies are only cost-effective for smaller quantities. The volume may also play an essential part for additive manufacturing parts as bigger parts will require more time to print compared to smaller parts.

Prototypes are created for a couple of purposes including learning, integration, communication, and milestones. The purpose will vary depending on the NPD (new product development) stages you are in. Each of the stages has requirements regarding features and functionality to eliminate risk, so this will define the type of the prototype.

The complexity of the part will also dictate the process selection. Various forms of castings can be prototyped, using 3D printing, while machined parts can be manufactured or 3D printed using conventional forming or subtractive manufacturing processes.

Time, man-hours, and money need to be considered while choosing the rapid prototyping process. Note that some processes like 3D printing may need post-processing time. Bear in mind that the overall cost might be linked to the quantities more for a process like CNC because of the higher set-up cost.

Although rapid prototyping has many benefits, it can be hard to choose which type of 3D printing to use. Following the most common methods of rapid prototyping might ease the pressure when selecting a process. Note that selecting the right process is crucial to the success of any engineering product.